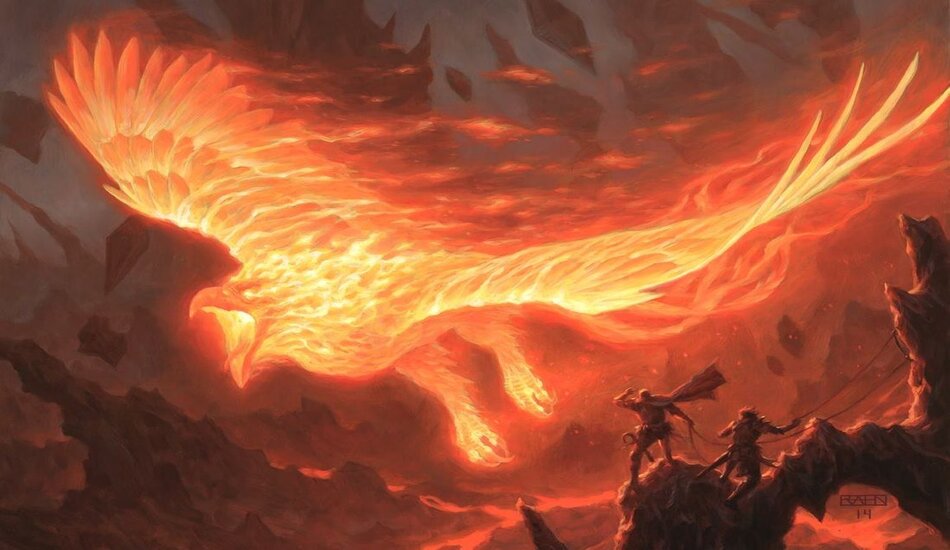 Izzet Phoenix received a new weapon in today’s Theros: Beyond Death spoilers with Phoenix of the Ash.

Phoenix have been a staple in Magic: The Gathering since Legends. And with the upcoming release of Theros: Beyond Death (THB), Phoenix of the Ash arrives with the Escape mechanic.

The THB card wasn’t previewed in English but there is a rough translation of its contents.

By itself, Phoenix of Ash is a solid creature. It has flying and haste as a 2/2 and only costs three mana to cast. But it also has a dangerous synergy with Arclight Phoenix from Guilds of Ravnica. Arclight returns to the battlefield from the graveyard, at the beginning of a controller’s combat turn, if three or more instant and sorcery spells were cast that turn.

Spells this pairs well with include Sweet Oblivion (THB), Opt, Shock, and Glimpse of Freedom (THB).

These three or more instant and sorcery spells then fuel the Escape cost for Phoenix of Ash, possibly on the same turn if a player has enough mana. Both have haste and Phoenix of the Ash returns with a +1/+1 counter on it. And if a player is flowing in mana, they can even activate the +2/0 ability on Phoenix of the Ash and attack for a total of eight in the air.

Synergize Phoenix of the Ash in Standard Constructed when Theros: Beyond Death releases on Jan. 24.