Running the Cabaretti family as second in command, the legendary Streets of New Capenna spoiler Jinnie Fay, Jetmir’s Second turns Magic: The Gathering tokens of any kind into cats and dogs.

The MTG colors Green and White have supported go-wide strategies throughout the years, typically through cheap creatures and the creation of token creatures. The reveal of Jinnie Fay, Jetmir’s Second during today’s Streets of New Capenna (SNC) spoiler drops, takes token creation to a whole new level by giving players the option to turn any type of token into a cat or dog creature token instead.

Each of the five crime bosses within the SNC set have represent three colors for their families, with Jetmir running the Cabaretti family via the MTG colors Red, Green, and White. Jinnie Fay, Jetmir’s Second contains the same three colors for her casting cost, but in hybrid form, making it easier to get her onto the battlefield as early as turn three. 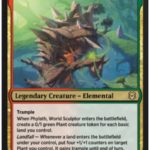 Jinnie Fay fits right into MTG decks that are aggressive and have go-wide strategies within the colors Green and White. But she can also improve Green and Red builds by turning plant tokens created by Phylath, World Sculptor into cat or dog creatures, or give cat tokens from Esika’s Chariot a boost in power by flipping them to dogs. 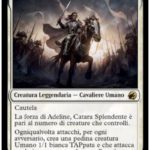 Tokens created by Adeline, Resplendent Cathar no longer have to have 1/1 stats with Jinnie Fay on the battlefield and Battle for Breagard just rose in value thanks to the Cabaretti’s second in command.

Jinnie Fay, Jetmir’s Second can change any token into a cat or dog. This includes Blood, Treasure, Food, and even Clue tokens. An abundance of Treasure tokens from Goldspan Dragon can get turned into cats and dogs instead, and Blood Petal Celebrant can make a creature token with Jinnie Fay instead of a Blood token upon getting dying.

Players can test out Jinnie Fay, Jetmir’s Second with the global release of New Capenna on April 29 and on MTG Arena via the digital launch on April 28.