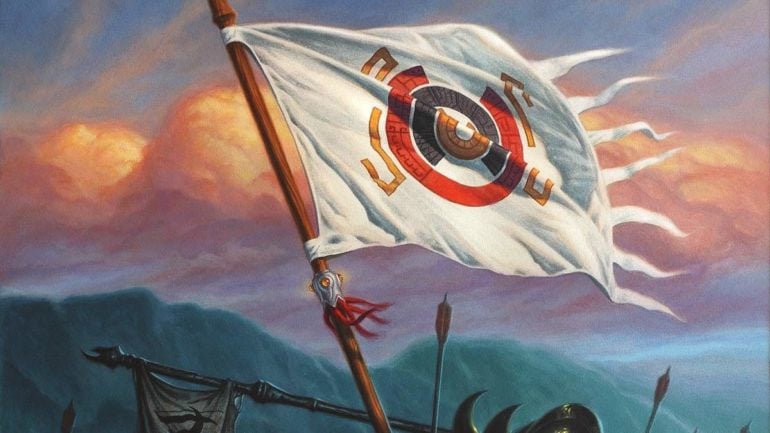 Throne of Eldraine (ELD) spoilers have revealed a new, flexible artifact called Heraldic Banner. With the set about to drop for Magic: The Gathering players, here’s what you should know about this very playable artifact.

Heraldic Banner has all the looks of a Limited all-star. It’s basically two different cards. The first mode is when you need access to a certain color of mana but don’t have it yet. Simply drop Heraldic Banner, pick that color, and continue your gameplan.

But it also has a second, much more aggressive mode. If your deck is mostly the same color, Heraldic Banner doubles as a powerful anthem. We’ve already covered several other powerful anthem effects and this one is no different. Most notably, unlike the others, this anthem effect is based on color and not creature type. That opens up a lot more doors in Limited, meaning Heraldic Banner will really shine in one or two-colored Draft or Sealed decks.

The ideal setup, of course, is taking advantage of both modes. If you’re only running one color, this effectively serves to ramp you as well as empower all your creatures. Mono-Green and Mono-White decks may not have space to run non-creature spells like this, but if they do, Heraldic Banner may end up in the spotlight in Standard as well.