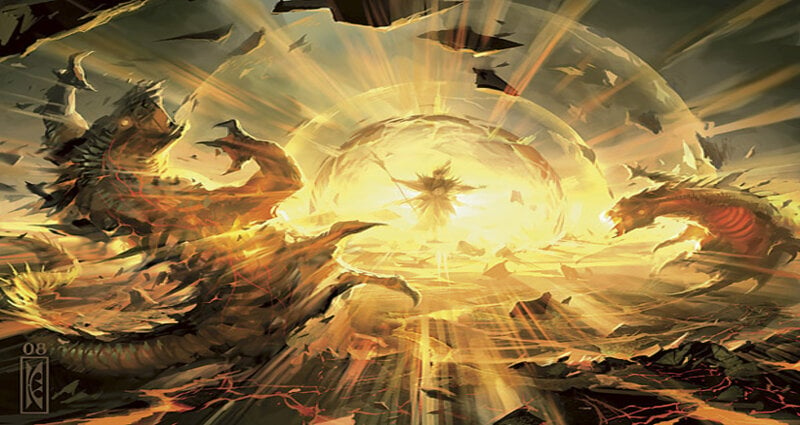 Wizards of the Coast revealed a continuation of the Magic: The Gathering Ultimatum cycle in Ikoria: Lair of Behemoth today with Eerie Ultimatum, Ruinous Ultimatum, and Emergent Ultimatum

The Ultimatum cycle began 11 years ago with the release of Shards of Alara. Several of the “large” mana cards had a major impact on Standard and still do to this day in Commander. Eerie Ultimatum continues this tradition in IKO, producing fear and joy over the trouble it will cause in Standard and Commander. The same can be said for the other Wedge Ultimatums as well.

Commander players are thrilled over Eerie Ultimatums’ broken potential. The three mana, seven cost Sorcery spell in IKO brings any number of permanents with different names from the graveyard to the battlefield. In Commander, this is practically every card in a player’s graveyard.

Permanents in Magic include lands, Enchantments, Artifacts, creatures, planeswalkers, and more. The lands will come into play untapped, allowing the player to use mana abilities. Self-mill decks in Standard will automatically include Eerie Ultimatum, using cards like Cavalier of Thorns and Death’s Oasis.

Ruinous Ultimatum is the opposite of Eerie Ultimatum. Rather than flooding the battlefield with permanents, the sorcery spell removes all non-land permanents your opponent controls.

Both Ruinous and Eeerie are game-ending spells. The trick, however, is lining up mana. There are several IKO cards that can assist in making sure a player has the right mana for an Ultimatum to pop off. These include the Artifact Cycle Lands, Migration Path, Farfinder, Migratory Greathorn.

Emergent Ultimatum challenges players to find the three most busted monocolored cards within each Magic format. An opponent will choose those three cards, as long as they’re the only monocolored cards in a player’s build. One of those returns to the library while the other two are played without a casting cost.

Upon first glance, Immaculate Ultimatum seems like the weakest spell in the IKO Ultimatum cycle. It pales in comparison to Ruinous and Eerie, but Immaculate Ultimatum still has potential, gaining life for Control decks and Jeskai Fire builds. It also deals five damage to any target, which includes “to face,” and draws five additional cards.

The final Ultimatum has the potential for game-ending dramatics but likely won’t be able to produce consistent results. Genesis Ultimatum allows a player to look at the top five cards of their library, putting any number of permanents onto the battlefield and the rest in hand. Much of the IKO Ultimatum’s impact is determined upon card draw, but the worst-case scenario still has a player five cards up with some on the battlefield at no cost.