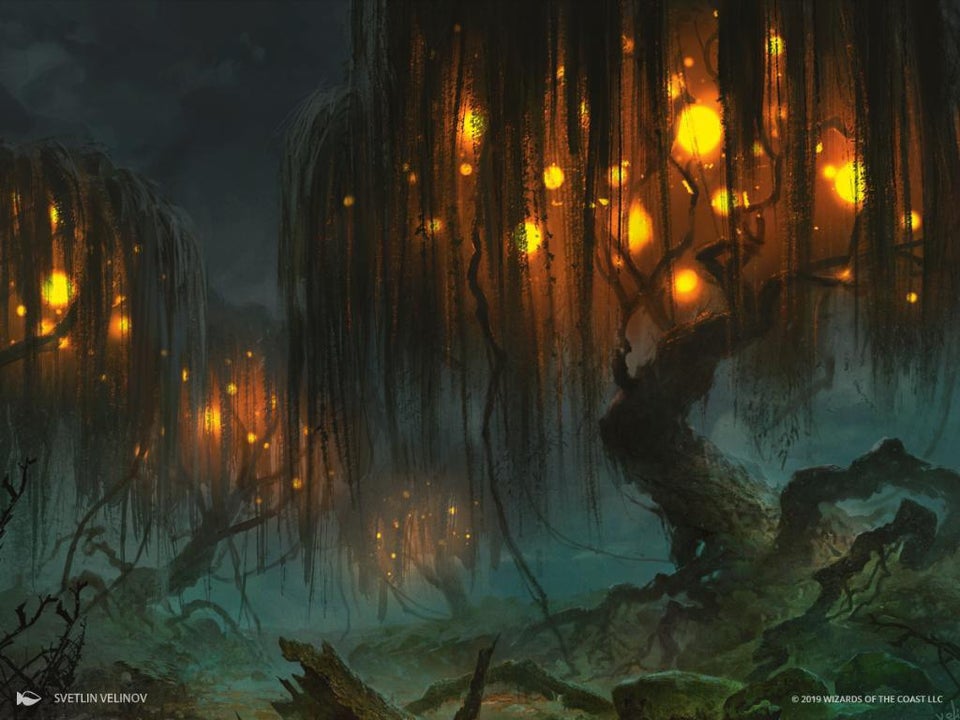 Black in Magic: the Gathering’s upcoming set, Throne of Eldraine (ELD) has four archetypes: Black-Green Food, Black-Blue Graveyard, Black-White Midrange Knights, and Black-Red Equipment Knights. Functionally, this means that the Black cards need to be evaluated differently based on whether you’re using a Knights deck—and if you aren’t, Knights get a major downgrade.

Still, Black is the go-to color for removal and punishing mechanics, and Throne of Eldraine isn’t pulling any punches when it comes to these cards. Here are the best Black common and uncommon cards in ELD.

Bake into a Pie

Unconditional removal is always a premium in Limited, and although Bake is expensive, it comes with some bonus snacks to use later. This card is phenomenal in Black-Green, but it can provide great removal in any Black deck. Grab as many of these as you can.

But Wizards also likes to diversify removal with conditional abilities. Epic Downfall, in this case, is a perfect example. It can only bring down expensive creatures (note: tokens cost zero converted mana cost) and it’s at Sorcery speed, but two mana is so cheap and there’s no reason not to run at least one of these. Sideboard in many of these against Green decks if you have them.

This is the perfect kind of card to turn the tables on your opponent. It’s a 3/3 flyer for five mana, which is decent, but it does get outsized in the air by a few rares and other cards. Its activated ability, however, is arguably the best way to spend your Food tokens. This can either outright kill something or simply threaten to flip combat math way in your favor. The fact that it doesn’t require tapping pushes this into bomb territory since you can use it multiple times a turn,and even still get to attack with Naughty B.

Moving into Knights territory, Order of Midnight is a good pickup as one of the strongest Black knights. A 2/2 flyer for two mana, this Knight doubles as a make-your-own Gravedigger, considered by many as a powerful card in any Limited format. This ties directly into the Knights theme shared by two of Black’s main archetypes and it’ll be hard to pass on this creature.

As a 5/4 legendary creature, Syr Konrad is one of the strongest Black creatures you’ll see frequently in Limited. His triggered ability will be a continuous source of free damage as long as he’s alive and he even doubles as a nice enabler for Black-Blue Graveyard decks.

Foreboding Fruit is simply an on-themed Read the Bones, but that’s what makes it great. Geared for a heavy Black deck, this is a straight up two-for-one and can even give you back the life you just lost. Or, if you have a Food outlet, turn this into a combo enabler and go straight to value town.

Malevolent Noble was overlooked initially, but playtesters are reporting it to be perhaps one of the most powerful cards in Black’s Limited arsenal. A solid 2/2 for two, it’s activated ability is actually pretty cheap and should be easily usable two or three times over the course of the game. Find ways to combo off of it and this cheap creature doubles as a finisher.

In a perfect world, this is an impactful two-for-one that can potentially close out a game. The problem is, lining up that perfect play will likely never happen—there’s simply too many boxes to check. Your opponent needs to have a card in their hand worth discarding and an ongoing adventure. With a worst-case scenario of doing absolutely nothing, it’s smarter to move on from this dud.

While Eye Collector looks like a useful one-drop, it’s simply a trap that will teach its drafters about board impact. This card has none. It can attack in the air, unblocked, and kill an opponent after 20 turns or mill them after like 17 turns? No thanks.

This card is just horrible. At best, it’s a one-for-one against Black players, but if you miss on a Black card, suddenly you have to exile something out of your own hand as punishment. We don’t see a world where this is playable, outside of an extremely tight meta pick in some Standard deck’s sideboard. In a set with Bake into a Pie at common, just draft those all day.