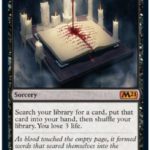 Wizards of the Coast launched its Core Set 2021 spoilers this morning, revealing several reprints that will likely shake up the Standard format.

Reprints are a staple in Core Sets, returning powerful and highly-requested Magic cards to the Standard format while also reducing the secondary market costs for players using these cards in various other formats.

A first look at the upcoming set in this morning’s spoiler stream revealed that Grim Tutor, Ugin, the Spirit Dragon, Azusa, Lost but Seeking, Fierce Empath, Runed Halo, and Tormod’s Crypt are all reprints included within the M21 set that releases on July 4.

Cards like Grim Tutor haven’t been reprinted in Magic since the ’90s, making its inclusion in M21 a big deal. It’s also a powerful Sorcery speed spell that allows a player to search their library for a specific card. But that “tutor effect” has a price that costs the player three life.

Azusa, Lost but Seeking is another powerful reprint in the Standard and Commander formats. The legendary monk provides ramp by allowing two additional lands played on her controller’s turn and only has a CMC of three. Ramp provided by Azusa can assist in getting one of the more powerful planeswalkers in Magic out early, Ugin, the Spirit Dragon.

The spoiler season for M21 will run from June 5 to 19, with the set having a digital release on June 25 and an official launch on July 4. A prerelease is also scheduled to take place from June 26 to July 2.