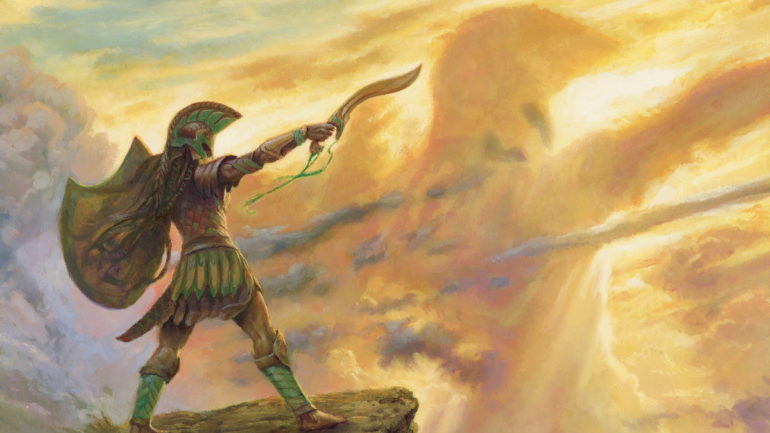 Wizards of the Coast unveiled its plan for all Magic: The Gathering set releases in 2020 yesterday, in addition to a mountain of spoilers and other changes for the upcoming set, Throne of Eldraine (ELD).

Theros is thematically based on Ancient Greece and features an expansive pantheon of gods, a number of city-states, and savage monsters and giants that roamed the wilderness.

Players are particularly interested in the plane’s underworld, which is hinted to be a major part of the upcoming expansion. Fan-favorite planeswalker Elspeth is presumably there after being murdered by the Zeus-like Heliod in a major act of betrayal. Gideon, another favorite planeswalker, recently died and was buried on Theros as well. Lore speculation will be buzzing over the next few months.

Ikoria is all about monsters, according to head designer Mark Rosewater. The video reveal of the set even hints at a “create-a-monster” mechanic that is one of the “craziest mechanics we’ve made in quite a while.” Ikoria is a brand-new world without any previous hints to its existence, so we’ll have to wait to find out more.

Each summer sees the release of a Core Set, aimed to fill several holes that the more thematic and complex sets can’t cover, including allowing for more newcomer-friendly Limited environments.

Core Set 2021 will be based around the planeswalker Teferi, a powerful time mage that recently joined the “Gatewatch” (Avengers-style good guy crew). Teferi has been a stable and powerful presence in Standard over the last year, so fans are hoping he gets a little time off before becoming the Standard-bearer again next summer.

Zendikar, like Theros, is another returning set and has a major place in Magic lore. The unique plane has powerful magical leylines that leave it both unstable and ripe for exploit by talented mages. This trait makes it a big target for baddies, particularly the otherworldly Eldrazi.

Players’ first trip to Zendikar happened in 2009 with the Zendikar block. Dubbed an “adventure world” by its developers, Zendikar was designed around traps (the Trap mechanic), maps (the Quest mechanic), and chaps (the Allies mechanic). It also features unique land design, including the powerful landfall mechanic.

The third set in the block, Rise of the Eldrazi, turned the block on its head by releasing powerful Lovecraftian monsters into the mix, including one of the most powerful creatures ever printed, Emrakul, the Aeons Torn.

The second visit to Zendikar in the Battle for Zendikar block documents the Gatewatch’s attempt to scour the plane of the Eldrazi. Ultimately, the plan worked but released Emrakul into the wild. Fans were disappointed with Battle, particularly due to the insular design (it didn’t play well with other sets) and a perceived weakening of the Eldrazi brand by printing more of them and at all power levels.

Rosewater promises that the third trip in Zendikar Rising will feature a return to form for Zendikar.