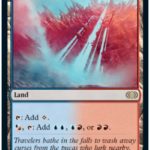 A necessary dual cycle of Magic: The Gathering enemy lands was introduced today, showcasing all 10 filter lands in Double Masters.

Originally printed in Shadowmoor and Eventide, the 10 rare filter lands revealed today somewhat make up for the lack of fetch lands in the upcoming release of the MTG Double Masters set. For the first time in decades, both the allied and enemy filter lands are contained in one set.

Filter lands allow a player to tap them for colorless mana. A player can also tap it and another hybrid color of mana to get two mana of that color or one of each. In UW Control decks, for example, Mystic Gate, when tapped with either Blue or White mana, produces either WW, UW, or UU mana. 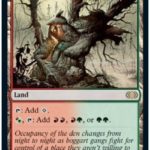 While filter lands are hardly on the same level as fetch lands, they still provide ramp and mana fixing. And the price of Double Masters might be on the high end for most, but at least the set is offering twice as many rare slots, making it a tad easier to acquire these filter lands.

WotC did promise that fetch lands would return in 2020, with many players eyeing the upcoming release of Zendikar Rising. The filter lands in Double Masters aren’t Standard legal, though, since the cards are reprints for Eternal Magic formats.

Set to release on Aug. 7 via tabletop, Double Masters will become available for Magic Online on Aug. 6.