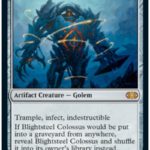 Wizards of the Coast introduced a new Magic: The Gathering set today full of popular reprints that will release in August.

Unlike the release of Modern Horizons in 2019, Double Masters will contain only popular reprints, according to WotC. The set will release on Aug. 7 and be available via Magic Online on Aug. 6.

Double Masters will contain a total of 332 cards with either two Rare or Mythic Rare cards in each booster pack, along with two foil cards.

Sticking with the “double” theme, WotC has doubled the Rare slots, box toppers, and first-picks in Draft. Additional details and spoilers are scheduled to release today at 4:30pm CT on the Weekly MTG stream.

The price of booster packs and the Magic formats that Double Masters cards will be legal to play in will likely get revealed later today during the stream.

Update May 22 9:45am CT: Double Masters cards are playable in the reprints legal format. Prices for booster packs and boxes were also uploaded to Amazon, according to a Reddit post.

Update July 30 12:30pm CT: The prices for Double Masters rose again just prior to release. Here are the updated prices on Amazon.