Let the insanity of no casting cost begin. 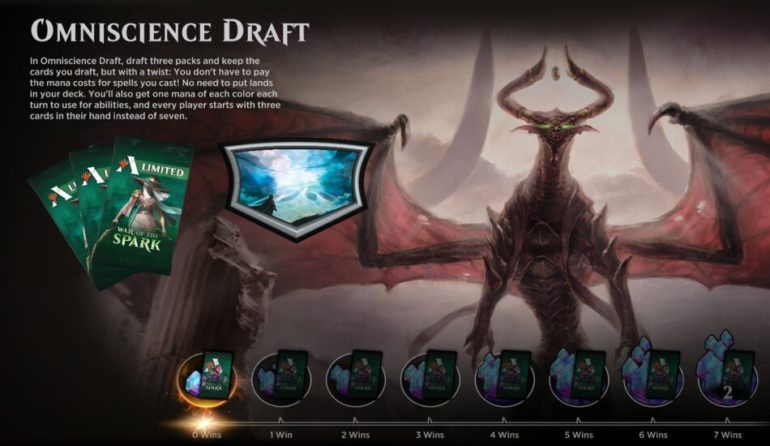 Screengrab via MTG Arena Wizards of the Coast

The insane and incredibly fun Omniscience Draft returns to MTG Arena this weekend in the War of the Spark expansion.

The Omniscience Draft is based on the Core Set 2019 card, Omniscience. It’s different than other Limited Drafts in that a player casts spells without paying mana costs.

Like a normal Draft, three booster packs are rotated around while players pick one card per rotation. Lands aren’t necessary, so your minimum 40-card deck can contain more spells than normal. Instead of using a little over half the cards you draft (due to space for lands), players will use almost all of them.

Drafting rules change because of the lack of mana cost, meaning the curve doesn’t matter. What does matter, however, is picking cards with “card draw” because players only start the match with three cards as opposed to the normal seven. In addition, each turn provides players with one mana from the color wheel to cast mana abilities on cards.

The Omniscience Draft is a great opportunity for new players to have fun drafting, along with veterans on MTG Arena who are just looking for a change. Players just need to remember that “card draw” is the most important factor to look for when drafting, followed by “counterspell” and burn cards.

The Omniscience Draft in MTG War of the Spark returns to MTG Arena from June 28 through July 1 at a cost of 5,000 gold or 750 gems.