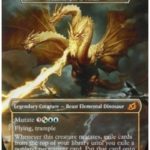 The 2021 Standard rotation within Magic: The Gathering dropped some Ikoria: Lair of Behemoths card values while others have risen in price over time.

Upon the release of IKO, Companion cards dominated the meta. Prices fluctuated throughout the set’s run in Standard, with a few maintaining value post-2021 Standard rotation. Many of the Triome lands are worth between $10 and $50, depending on the version. And several IKO Godzilla Showcase versions are still worth money while a special version of Winota, Joiner of Forces is worth over $100.

From a cat nightmare to an enchantment that creates shark tokens, here are the IKO cards worth money, according to prices from MTGGoldfish and MTGStocks.

Illuna, Apex of Wishes is a part of the IKO Godzilla Showcase cards. The regular card is only worth a couple of bucks but the Ghidorah, King of the Cosmos foil extended art version is valued at around $63. Every other type of alternative art or Showcase for either version is priced around $5 or less.

Lurrus of the Dream-Den was one of the most-played companions in Magic across multiple formats. But a ban of the companion within the Vintage and Legacy formats hurt its value some, especially in tabletop. Lurrus of the Dream-Den has an extended-art foil version worth around $56. A promo prerelease is valued at $14 and the regular version of the cat nightmare is priced at $4.

Formerly a top Standard Constructed card and now played in MTG formats like Pioneer and Modern, Shark Typhoon has an extended-art foil version worth around $52. The Blue Enchantment also has a planeswalker foil stamp priced at $20, along with a prerelease promo at $17. Shark Typhoon’s regular version is worth around $16.

The Ozolith is a powerful legendary Artifact that’s able to retrieve counters off creatures that die and place them on another target creature. There’s an extended-art foil version of the legendary Artifact priced at around $55. The Ozolith also has a prerelease promo foil worth $45, a non-foil extended version at $35, and the regular version is valued at around $25. 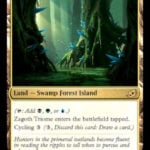 Luminous Broodmoth was one of the few IKO regular-priced cards that hit a peak value of around $30 but fell to around $15 leading up to the 2021 Standard rotation. The insect has a Godzilla Showcase extended-art foil version worth around $48 and a non-foil version at $38. Mothra, Supersonic Queen’s regular version as Luminous Broodmoth is valued at around $9.

Zilortha, Strength Incarnate, also known as Godzilla, King of the Monsters, found a home among Commander players but failed to see much play within the MTG Standard format. The leader of the IKO Showcase versions also failed to pop off in price, worth only about $8.

Update April 29 at 5pm CT: All IKO card entries were updated following the release of Streets of New Capenna.