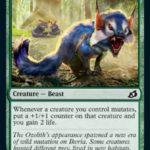 Limited Booster Draft in MTG Arena now includes drafting with other players. Similar to drafting at a local game store, players can no longer rely on bots to pass over top picks.

Knowing which Ikoria: Lair of Behemoth cards are solid picks ahead of time has become even more essential. Green provides mana ramp and fixing, ideal creatures to Mutate, and Cycling on the larger creatures that would normally get passed by in a draft. It isn’t the strongest color in IKO Limited, but it’s worth combining with either Red or Black.

We’ve applied a combined score to every Green uncommon and common in IKO, ranking the top 10 in descending order.

A two-mana creature with upside is always a good option to include in Booster Draft. Essence Symbiote should trigger at least a few times, especially since it’s in Green. Gaining two life with each Mutate trigger and adding a +1/+1 counter on the mutating creature makes it worth having at least one copy.

Hornbrash Mentor is a solid three-mana 3/3 who puts a permanent Trample counter on a non-human upon entering the battlefield. There’s also a mana ability with Hornbrash Mentor that allows a player to add +1/+1 counter to each creature with Trample. It’s a solid Human to include in decks and ideally slots into a Green and Red build.

Bristling Boar is an M19 and M20 reprint within the IKO set. It’s always been a solid pick in Limited but stands out as an ideal creature to Mutate with and as a target for a Menace counter. When combined with Frillscare Mentor in Red, who puts a Menace counter on a creature when entering the battlefield, Bristling Boar becomes unblockable.

Combat tricks are fun but not necessarily top picks in Limited. Fully Grown changes things up in IKO by adding a permanent Trample counter to the creature. The true trick is casting Fully Grown at the right time since it has a CMC of three.

Fertilid is a reprint that provides value via finding lands with its mama ability. It’s also an ideal creature to Mutate with since its +1/+1 counters carry over. IKO is a wedge set, favoring three-color builds. Fertlid is an ideal pick to assist in finding the mana a player needs for those three or more color builds.

A reprint from Amonkhet, Greater Sandworm is an expensive but solid 7/7 pick. With a CMC of seven, it’s hardly an ideal early draw. But with Cycling, it increases in value—it can be dumped during the early game if it’s a dead card in hand. And when combined with Black, there’s a good chance it can get reanimated onto the battlefield prior to turn seven.

A two-mana 1/3 is a solid pick to slow down Aggro builds. Humble Naturalist provides additional value by either ramping or mana-fixing multicolored builds. It can only provide mana to cast a creature spell. But in Green, that shouldn’t be too much of an issue.

Having access to Reach in Limited can change the course of a match. Glowstone Recluse is on the weaker side as a three-mana 2/3. But it gains a tremendous amount of value via Mutate. When mutated with a larger creature, Reach remains and the mutated creature gains two +1/+1 counters.

It’s ironic that Titanoth Rex is a solid creature in an IKO Draft when normally it might be the worst. But with the addition of Cycling, the 11/11 creature with a CMC of nine becomes a solid pick. When played with Black, Titanoth Rex can get reanimated as soon as turn five. And if reanimation isn’t a possibility, players can use Cycling to dump it if it’s a dead card in hand. But if played, Titanoth Rex is a true finisher.

Ikoria Draft rankings in the other colors