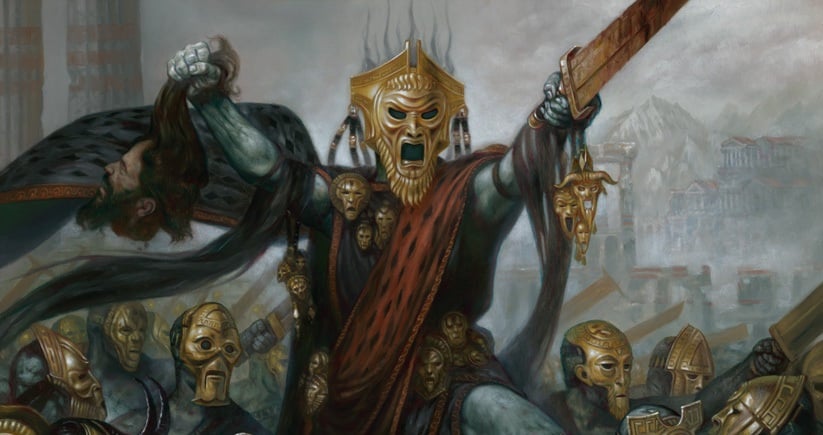 First revealed in Magic: The Gathering via the Shadowmoor block, demigods are reintroduced in the new set, Theros: Beyond Death.

Demigods are returning to Magic with a whole new look, supporting the mechanic Devotion in the Theros: Beyond Death (THB) set. There are five demigods in the new THB set, all of which are of the Uncommon rarity. Similar to Gods in the THB set who rely on Devotion to become creatures, each demigod has their power or defense determined according to a player’s Devotion toward that color.

These demigods aren’t the most powerful creatures in the THB set, but they’re designed for crafting in Monocolored decks, promoting synergies, and gaining power or defense via the Devotion mechanic.

Anax, Hardened in the Forge

Anax, Hardened in the Forge gains his attack power via a player’s Devotion to Red with a set defense of three. He also creates a 1/1 Red Satyr creature token when a nontoken creature that you control dies. If the nontoken creature had a power of four or greater, Anax creates two 1/1 tokens instead.

In a Mono-Red Aggro build, Anax, Hardened in the Forge fits right in. The 1/1 tokens synergize with Cavalcade of Calamity, similar to the tokens created by Chandra, Acolyte of Flame, except that Anax’s tokens stick around. Anax has a CMC of three, curving right into Torbran, Thane of Redfell on turn four.

A Midrange build is also possible with Anax when paired with Gallia of the Endless Dance, who gives all Satyrs +1/+1 and haste.

Callaphe, Beloved of the Sea

Callaphe, Beloved of the Sea has a CMC of three, two Blue, and has her power level determined via a player’s Devotion to Blue. Her defense, like that of Anax, is also three. Her static ability deters opponents from targeting your creatures with spells, increasing the cost of those types of spells by one additional mana.

The demigod Callaphe helps protect Blue creatures such as Cavalier of Gales or the new THB creature, Nadir Kraken. But taxing an opponent one mana isn’t the same as having Hexproof or protection from a specific color. Callaphe is a solid three-drop in a monocolored build, but she might not be the best one available.

Daxos, Blessed by the Sun

Unlike the previous two demigods mentioned, Daxos, Blessed by the sun only has a CMC of two and both are White. His defense is determined by a Devotion to White, not his attacking power.

Heliod places a +1/+1 counter on a creature every time life is gained and Daxos, Blessed by the Sun has the potential to produce plenty of lifegain throughout a match. Other ideal card synergies for a lifegain deck include Impassioned Orator and Linden, the Steadfast Queen.

Renata, Called to the Hunt

Renata, Called to the Hunt has the most costly CMC of all the demigods. In a Limited format, however, she’s worth its price. A player’s Devotion to the color Green determines her attacking power and Renata’s defense is three.

But with her static ability that adds a +1/+1 counter to creatures entering the battlefield, it’s unlikely that you’ll put her at risk when attacking. Renata is similar to The Great Henge but doesn’t add additional mana or lifegain. Depending on the creatures in your Mono-Green build, Renata doesn’t come onto the battlefield much earlier than The Great Henge does.

There’s also a cheaper version of Renata in Standard via Gruul colors with the creature Grumgully, the Generous.

Similar to Daxos, Tymaret, Chosen from Death has his defense determined via a player’s Devotion to the color Black. His attack is a measly power of two. Tymaret synergizes with the theme of removal in Black, exiling up to two target cards from any graveyard. For each creature exiled this way, you gain one life.

Tymaret is an ideal sideboard card in Constructed and a solid pick in THB Limited. He has the power to remove powerful cards from the graveyard before an opponent can return them using the Escape mechanic or via other regeneration means.