The Faerie tribal theme is returning to Standard. 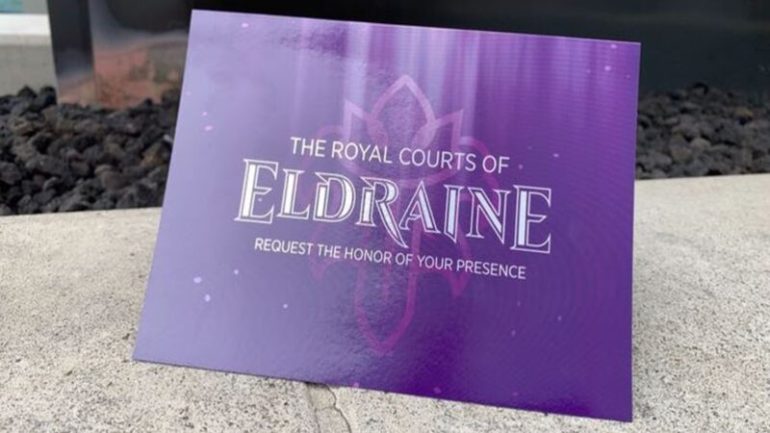 Image via Screenrant and Hasbro, Magic: The Gathering

Leaked pictures from the Hasbro breakfast at San Diego Comic-Con (SDCC) show that the new Magic: The Gathering set could have a fairy tribal theme.

The Core Set 2020 has barely been in stores for a week and MTG is already gearing up for its next fall set with major announcements coming this weekend at SDCC.

News broke during this morning’s breakfast meeting at SDCC, showcasing promo cards reading “The royal courts of Eldraine request the honor of your presence.” Inside the card, the name of the fall set (previously code-named “Archery”) is revealed to be Throne of Eldraine.

Faeries are a popular theme in MTG but they haven’t been seriously used in Standard since the Lorwyn block. Lorwyn, the first set in the block (released in 2007), ran a host of tribal themes with Faeries being a big hit. Primarily featured in Blue and Black, Faeries are a common tribal theme in the Commander format.

Two top Commander Faries in EDH are Oona, Queen of the Fae and Wyden, the Biting Gale. With synergies between Faeries being increased in Standard from the M20 set, many in the MTG community are excited about what Throne of Eldraine will bring to the table. Cards like Faerie Miscreant, Winged Words, and Leyline of Anticipation are going to play a major role in Standard this fall.

On Saturday, July 20 at 8:30pm CT, Mark Rosewater is hosting an MTG panel at SDCC. The panel will break down MTG Throne of Eldraine regarding featured themes (like Faeries), creatures, artwork, and much more.