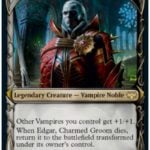 The original Magic: The Gathering Innistrad vampire, Edgar Markov, is returning via Crimson Vow with a unique Double-Faced card that’s a legendary creature on one side and an Artifact on the other.

The reveal of Edgar, Charmed Groom by TCGplayer indicates that the Gatewatch and Sorin might not be the only ones attempting to crash Oliva Voldarn’s wedding of the ages. Fitted with the MTG colors Black and White rather than traditional vampire colors Black and Red, the Innistrad: Crimson Vow (VOW) Double-Faced version of Edgar Markov spins a unique twist on legendary creature gameplay.

The BW Limited archetype in VOW has a Lifegain theme, which carries over into Edgar, Charmed Groom. He also serves as a lord, pumping all vampires with +1/+1 stats. But his true power comes from being a legendary creature and an Artifact.

There’s no shortage of Black vampires in the Standard format. Cards like Valentin, Dean of the Vein, Nullpriest of Oblivion, and Nighthawk Scavenger support Lifegain synergy in conjunction with cards like Cleric Class and Markov Purifier.

Should the battlefield get board wiped, as is common within the Standard meta, Edgar continues to provide value by creating tokens with Lifelink. And if you get stuck with multiple Edgar, Charmed Groom’s in hand while Edgar Markov’s Coffin is on the battlefield, create a token and then replace it, turning the token into a 2/2 with Lifelink.

Players can test out whether Edgar, Charmed Groom has a place within the Standard format with the digital release of VOW on Nov. 11.