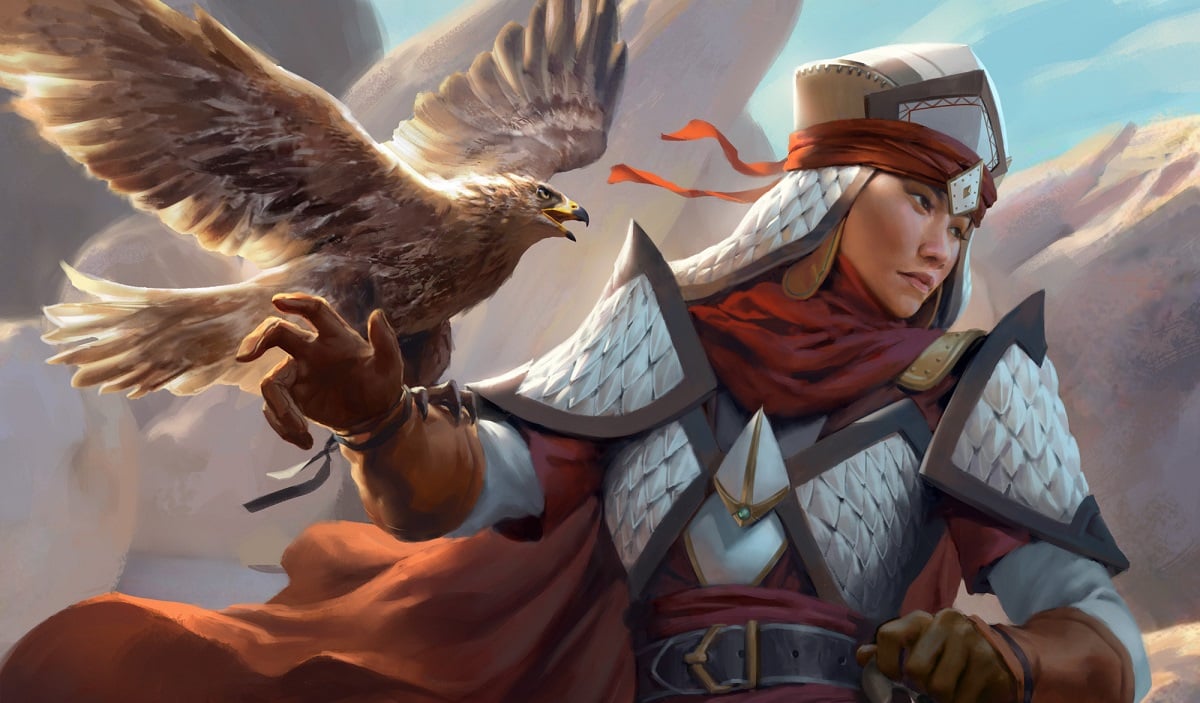 Magic: The Gathering Core Set 2021 (M21) launches this week. That means it’s time to talk about the set’s Limited archetypes and themes so you can build the best deck possible.

Here’s what you need to know about the upcoming set.

As with most Core sets, M21 has 10 dual-color archetypes and signpost uncommons to send players in the right direction.

Azorius decks are all about controlling the ground game and winning by taking to the skies. Common playables like Mistral Singer and Gale Swooper get some major backup by this deck’s signpost uncommon, Watcher of the Spheres. Just don’t forget to draft some solid ground blockers like a late-pack Wishcoin Crab.

Embrace the dark side with Dimir this season by bringing dead things back to life. The first step is to fill the graveyard with cards like Rousing Read or this deck’s signpost uncommon, Obsessive Stitcher. Then, bring back your best cards with the selfsame Stitcher or equally playable Rise Again. Look for powerful synergies in cards like Archfiend’s Vessel or simply raw power like Gloom Sower.

Sacrificing your own creatures for profit is the gameplan for Rakdos decks in M21. Pick a handful of enablers like Goblin Arsonist and Deathbloom Thallid, then go all-in on attacking with the signpost Dire Fleet Warmonger and Hobblefiend. You could also get straight value by casting Village Rites and Goremand.

Gruul decks go big or go home. Four power is the sweet spot as usual for M21 and cards like Turret Ogre and Bone Pit Brute are the perfect creatures to power up this deck. Throw in value like Ornery Dilophosaur and the mana-generating signpost uncommon Leafkin Avenger. What is there to do with all that mana? Go even bigger.

Make sure to bring some extra dice if you’re playing Selesnya this season because +1/+1 counters are all over this deck. Early plays like Pridemalkin and Makeshift Battalion get the counter train rolling, then get bolstered by creatures like Basri’s Acolyte and removal like Hunter’s Edge. Payoffs in the form of Wildwood Scourge and signpost uncommon Conclave Mentor are playable at any point in the game and can get out of control quickly.

Orzhov cares about gaining life, and in M21, the magic number is three. Gain three by using cards like Revitalize or take risks with Tavern Swindler. This deck looks geared more toward a controlling style of gameplay, so pack in plenty of removal. Then, get cards back with Sanguine Indulgence or build a finisher using Light of Promise. Signpost uncommon Indulging Patrician gives your deck inevitability, so feel free to play defense.

This deck’s signpost, Twinblade Assassins, gets straight to the point: Golgari decks want things dead. Sometimes, that’s from combat, but you can also just use signature black removal spells like Finishing Blow and Grasp of Darkness. True to form, these decks get the most benefit from death, evidenced by cards like Caged Zombie and Sabretooth Mauler.

Drawing cards is great and Simic decks are going to be drawing in spades. Draw a little with Frantic Inventory or draw a lot with Read the Tides. You can even draw by attacking with Library Larcenist. Payoffs come in green in the form of Gnarled Sage, Burlfist Oak, and the deck’s signpost, Lorescale Coatl.

Set up your Izzet decks to explode by getting Prowess creatures on the board early. Blue and red have a handful to grab, including Jeskai Elder, Shipwreck Dowser, Mistral Singer, Heartfire Immolator, and the “super-Prowess” creature Spellgorger Weird. Then, unload your hand of cheap spells for an all-out attack using Shock, Crash Through, and Unsubstantiate. This deck’s signpost uncommon, Experimental Overload, plays a nice follow-up role, allowing you to create a big elemental and reload one of your best spells.

Make lots of creatures if you’re Boros in M21 because you’ll need them. Red White is all about going wide, so invest early in small attackers like Igneous Cur and the pair’s signpost uncommon, Alpine Houndmaster. Mid-game token plays like Valorous Steed and Falconer Adept are also welcome. Then, finish the game with a bang by empowering your attackers using Bolt Hound and Warded Battlements.

Themes to build around

There are several other draft-around themes for this set that are possible, though they mostly require specific cards as opposed to more general colors. If you see those cards, feel free to give it a try. But be warned that these decks are much more difficult to get working right.

Shrines are back in the form of M21‘s Sanctum cycle. All five colors are represented by these Legendary uncommons and there’s even a five-color rare to unite them: Sanctum of All.

The weakness of Shrine decks is also their strength: nobody else can get value from them. You’ll need to draft a lot, but nobody else will want them. They also require all five colors of mana, so make sure to grab fixing like Prismite along with gainlands. The green Sanctum of Fruitful Harvest is also a high pick for the same reason. This deck is powerful once it gets going, but it’s also a big puzzle to complete before your opponent can kill you.

M21 also added a rule change to the game, replacing the Hound creature type with Dog to coincide with the approaching JumpStart set. One particular rare in M21, Pack Leader, stands out as a top doggo to draft around.

This deck is essentially an RW go-wide deck that focuses on drafting good boys and attacking with them alongside Pack Leader. Roleplayers like Rambunctious Mutt and Selfless Savior add additional fire to this dogpile.