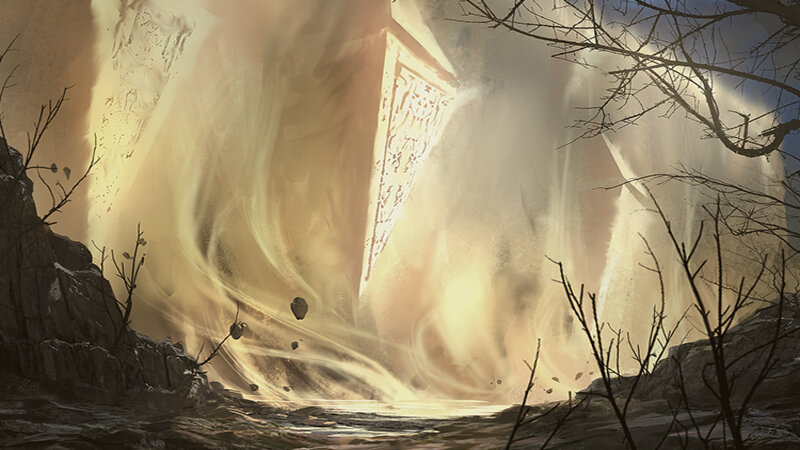 Who a player sits next to during a Commander event never mattered until today with the reveal of Pramikon, Sky Rampart in the Magic: The Gathering Commander 2019 set.

Commander is a multiplayer game in which each player reveals their commander before the match starts. It’s never mattered who one sits next to because any player can attack another (or multiple) at any given time as specified by their spells.

Pramikon, Sky Rampart has thrown this MTG rule out the window, however, since players can only attack whoever is nearest to them in the chosen direction as dictated by the person using Pramikon.

Pramikon, Sky Rampart disrupts the most basic rule of Commander and it’s a flying “Defender” wall for one/five. If multiple players are playing Pramikon, the table becomes like a game of UNO with each opponent throwing down a Reverse card. The same is true when it’s copied with cards like Helm of the Host or Spark Double.

The Pramikon reveal was joined by another defending structure, Wall of Stolen Identity.

Building a Commander deck around the Defender mechanic is something that many people in the MTG community have been asking Mark Rosewater for. And now, it’s become a reality thanks to Pramikon, Sky Rampart.

Other cards that would make good additions to a deck commanded by Pramikon, Sky Rampart include Vent Sentinal, Goblin Spymaster, and War’s Toll.

Related: Ignite the Future spices up Flashback in MTG Commander 2019

Pramikon, Sky Rampart and Wall of Stolen Identity are part of the MTG Commander 2019 set, which will be released on Aug. 19