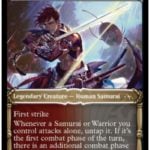 Extra turns have a new look in Magic: The Gathering via samurai warrior creatures within the upcoming Standard-legal set Kamigawa: Neon Dynasty.

Similar in ways to the Scout mechanic within Legends of Runeterra, Raiyuu, Storm’s Edge provides an additional combat phase as a reward when a samurai or warrior creature type attacks alone. The human samurai also has First Strike to support attacking alone but its 3/3 stats on a four-drop creature could hold it back due to increased power levels within Magic and solid removal.

The Boros colors of Red and White showcasing the samurai/warrior attack alone theme won’t likely break the Standard meta. Cards like Peerless Samurai improve the tribal theme within Limited, along with formats like Pauper and Commander.

Sunblade Samurai was another day four NEO spoiler that also looks like a solid card within Limited and Pauper formats, providing mana ramp and life gain via the mechanic Channel, in addition to a solid 4/4 body with a CMC of 4W.

And Heiko, Yamazaki, the General is a legendary creature like Raiyuu, Storms Edge, potentially acting as an alternative Commander within a Boros samurai/warrior themed build. The human samurai has base stats of 3/3 and Trample, along with an ability that lets you cast an Artifact from your graveyard that turn when a samurai or warrior attacks alone—synergizing with Artifact creatures that have the new NEO mechanic Reconfigure.

Players can test out the NEO samurai and warrior attack alone tribal theme with the digital release on Feb. 10, followed by a global launch on Feb. 18.