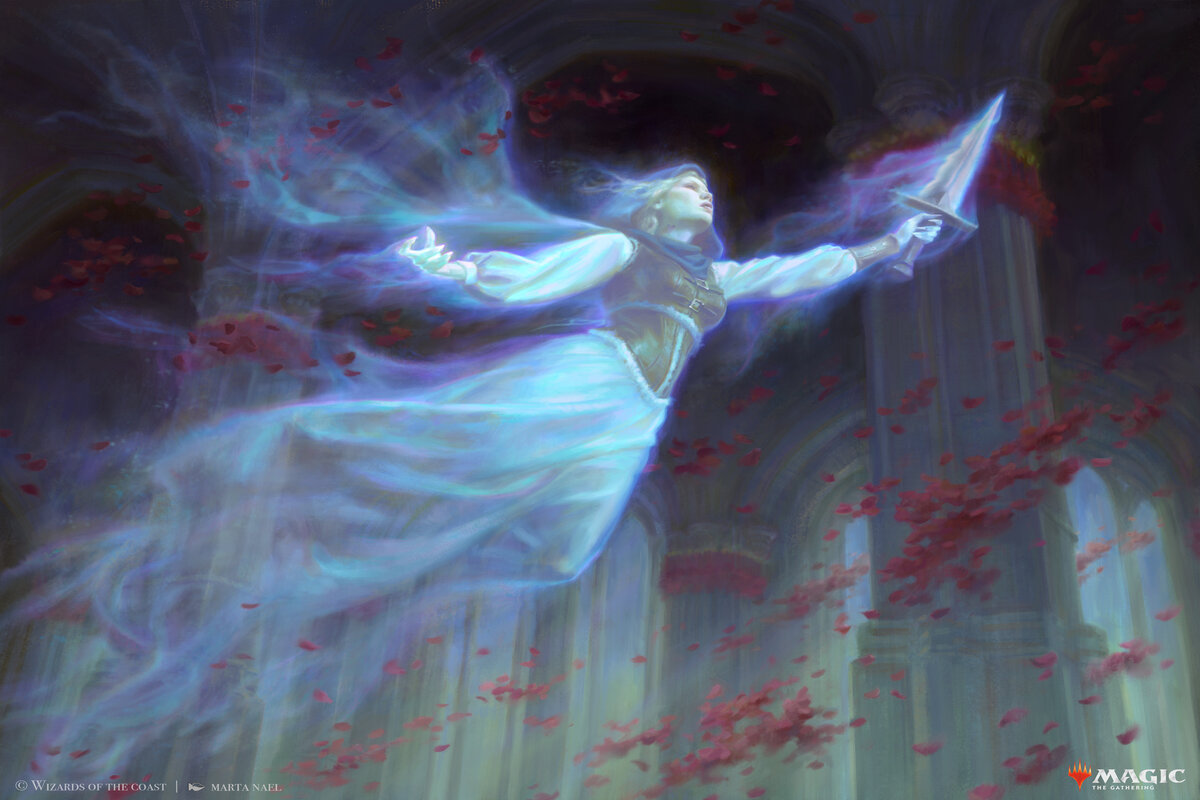 Taking place two weeks after the digital launch of Innistrad: Crimson Vow, the MTG Arena Standard Metagame Challenge was packed with Mono-White and various Control decks. Mono-Green made an appearance too, but not as much as Mono-White. Sliding under the radar at the Metagame Challenge was another Aggro option via UW spirits, able to hit fast and hard while also capable of dealing with a variety of top MTG decks.

The UW spirits build contains a similar shell to Mono-White, but with additional flexibility. There are a total of 35 creatures, of which 25 are spirits with a 1.9 mana average. Skyclave Apparition, Clarion Spirit, Luminarch Aspirant, Thalia, Guardian of Thraben, Stonebinder’s Familiar, and Intrepid Adversary are all within the main deck.

Here are the full 75 MTG cards within UW Aggro for best-of-three. Players can export the deck via copy and pasting the list to export into MTG Arena.

Separating the UW build from Mono-White Aggro are the evasive creatures Lantern Bearer, Spectral Adversary, and Katilda, Dawnhart Martyr. Lantern Bearer is a solid one-drop that can provide a creature with Flying later in a game via its Disturb cost. Spectral Adversary can remove pesky blockers for a lethal blow or protect one of your own creatures. And the Adversary is a spirit that has Flash, synergizing with Katilda, Dawnhart Martyr while taking opponents by surprise.

Katilda, Dawnhart Martyr can scale in power and toughness based on the number of spirits and/or Enchantments on the battlefield. The spirit warlock has Flying, Lifelink, and an added bonus of protection against vampires. Upon paying her Disturb cost of 3WW, she returns as the Legendary Enchantment Katilda’s Rising Dawn, which provides target creature you control all of Katilda, Dawnhart Martyr’s abilities and MTG Keywords.

There are 20 lands in the UW Magic deck, along with two copies of Kabira Takedown—acting as land when necessary and a solid piece of Instant removal against planeswalkers and creatures that can’t get exiled with Portable hole or Skyclave Apparition. One copy of Dorothea, Vengeful Victim is also in the main deck, providing flavor and attack value advantage when necessary. Any more than two copies of the Legendary spirit can make the build feel clunky.

Three copies of Homestead Courage can swing an advantage difference against Mono-White and Mono-Green Aggro decks, providing a permanent +1/+1 counter and Vigilance to that creature until the end of the turn. The Sorcery speed spell with Flashback works best on Katilda, Dawnhart Martyr, and can make a Stonebinder’s Familiar a 4/4 on turn two with two White mana.

The sideboard of UW Aggro is what really separates the MTG Standard build from Mono-White, though. Three copies of Portable Hole can deal with both monocolored Aggro decks, along with tokens. Elite Spellbinder buys time and Negate can counter those pesky noncreature spells like Meathook Massacre, Blood on the Snow, and Alrund’s Epiphany. Cemetery Illuminator is also a solid sideboard option for card advantage but can throw off the curve when playing against Aggro decks.

Two copies of Dennick, Pious Apprentice keeps Double-Faced spirit cards safe from Sungold Sentinel, and two copies of Terferi, Who Slows the Sunset can provide card advantage—especially when facing off against a Control deck. There are also two copies of Faithful Mending, providing additional card draw when mana screwed and life points as an added bonus.

Players want at least two untapped lands within an opening hand, along with a one and two-drop. Hitting curve within the UW Aggro build is important, as is making sure a Skyclave Apparition or Portable Hole is readily available during the early game stages. Either Clarion Spirit or Luminarch Aspirant are both solid two drops, and Stonebinder’s Familiar is typically the best one-drop to have in an opening hand.

UW Aggro isn’t the best MTG deck within the Standard meta. But it is top-tier, and able to hold its own in best-of-three matchups. Within best-of-ones, the build is slightly weaker. But for those looking for a change of pace on the VOW Ranked ladder, UW Aggro can help you climb via a flexible build that can match up with just about any MTG meta deck on the ladder.