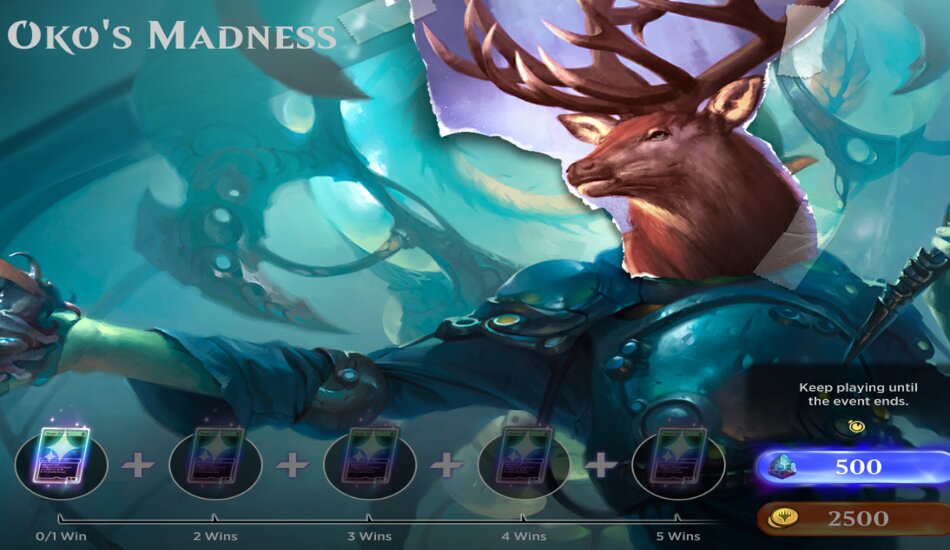 The playful spinoff of Momir Madness in MTG Arena has left the Magic: The Gathering community disappointed.

The Oko’s Madness tournament was supposed to be a fun meme-styled tournament that’s turned into a frustrating disaster for Magic Arena players who spent either 2,500 gold or 500 gems to play.

Oko’s Madness was a special tournament in MTG Arena and the second chapter of the Festival of Fae event that runs from Nov. 10 to 13. Similar to Momir Madness, the twist was that every creature token cast has power and defense of three and are Elks, in addition to their normal abilities.

There were 11 creature tokens players could randomly get by tapping a land and discarding a card.

Most games played in the event were over after turn two or three, with luck being the only factor in deciding a win or loss. Losses weren’t recorded, but MTGA players were frustrated over the lack of strategy and entertainment provided by the Festival of Fae event. And the current state of Standard dominated by Oko, Thief of Crowns didn’t help either.

“This particular format, and turning our avatars into elk, is particularly insulting considering the state of standard,” a Reddit user said.

Running the Oko’s Madness event at the same time as Mythic Championship VI was also a mistake, considering 69 percent of the field was playing Oko in their decks. A Banned and Restricted announcement is scheduled for Nov. 18, but Magic players are beyond fed up with the state of gameplay in Standard.

“By extension, this is how Standard feels right now,” a Reddit user said regarding the Oko’s Madness event. “Who wins the coin flip and lands their turn two Oko first? I can’t distinguish games from each other because the play patterns are so repetitive.”

Most Magic players on social media felt that the Oko’s Madness event was worse than playing in Standard. And those who did pay to play in MTG Arena ended up conceding matches so others who entered the event could win the rewards.

“I conceded about 30 games in a row,” a Reddit user said. “Enjoy the victories, my friends.”

The rewards in the event weren’t anything major, but the card styles are a nice addition to an MTGA player’s library.

The Oko’s Madness event runs through Nov. 13 via MTG Arena.