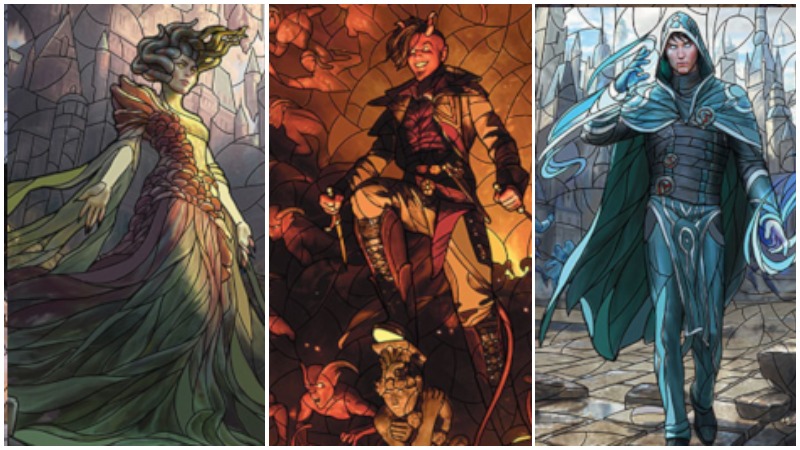 The May MTG Arena patch and update is here with new tournaments, MCQ qualifiers, best-of-three timers, cosmetics, and so much more.

Those who reached the Mythic rank in the previous season should have qualified for the MTG Arena MCQ. For those who did qualify, there should be an event on the home page labeled “Mythic Championship Qualifier.” If a player thinks they should have qualified but are not seeing the event on the home page, MTG Arena suggests calling customer support immediately.

War of the Spark Chronicles event

Starting May 23 is the War of the Spark Chronicles event, featuring five free-to-play tournaments, no loss record, and sweet rewards. Each event lasts a week and offers players rewards of gold and cosmetic stained-glass planeswalker card styles.

The first tournament is a Momir event, “Part one: Ravnica at War,” and will last until May 31. Upon the completion of an event, wins are reset, and new planeswalker card styles are offered in the rewards.

Battles will go towards daily quests and there isn’t an entry fee. There also isn’t a loss category, so players can grind away all they want to achieve the card style rewards.

Gates Ablaze is banned from the Momir “Part one: Ravnica at War” event and in next weeks “Part two: No Escape” Pauper tournament, Persistent Petitioners is banned.

Players can now choose between a standard direct challenge or a tournament style direct challenge. Updated in the best-of-three mode is a timer clock which is also available in the tournament direct challenge mode. The timer gives 30 minutes to each player per match, in which having the clock run out will result in an automatic loss.

In addition to the new timer mode, direct challenge tournament style is played in a best-of-three format, uses a coin flip to see who goes first, and allows for 60 minimum card decks with sideboards.

Players who turn off the auto-tap function are now given the option to auto-tap during convoking and paying “X” tasks. This helps speed up the process while leaving the auto-tap feature off in MTG Arena.

In addition, cards that are exiled but can be cast later will be highlighted and “kicked” spells will have a VFX when on a stack.

If the stained-glass planeswalker rewards in the War of the Spark Chronicles events seems too time-consuming, players can purchase them with gems in the MTG Arena store.

Updated and new cosmetic bundles for the month of may includes an amass power bundle, cast-tastic spells bundle, a proliferate bundle, and a chaos aggro bundle

Lands were having a glitch regarding un-tapping. This should now be resolved, especially when using Nissa, Who shakes the Worlds plus one ability. There was also a glitch involving Angrath, Captain of Chaos when sacrificed to Devouring Hellion (giving Hellion menace) which is now fixed as well.

Legendary Tokens which gain abilities are now displaying properly, while Cabal Stronghold is no longer generating incorrect amounts of mana. On the subject of mana, Dead Man’s Chest is no longer allowing for it to be used as “mana of any type.”