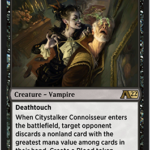 The Alchemy and Historic formats within Magic: The Gathering Arena is getting several rebalance updates in the month of May, targeting meta cards and buffs on build-around cards.

Scheduled to release via MTG Arena for the Historic and Alchemy formats is a new rebalance patch on May 5. The update contains a total of 13 nerfs and buffs, of which four target meta-specific digital-only and previously rebalanced Arena cards. Additional changes were also applied to cards within build-around decks, increasing their relevance in combat while making them harder to kill with removal.

Here are the 13 MTG Arena Alchemy and Historic nerfs and buffs for the month of May via WotC.

A total of four big changes were applied to cards within MTG Arena. Each has the potential to have a major impact on the meta within the Alchemy and Historic formats.

Text on the Mono-Black vampire was changed to add “nonland” upon entering the battlefield. The change, according to WotC, is to protect an opponent’s channel lands from the NEO set.

Players quickly began to exploit Painful Bond by placing the Instant spell in builds that predominantly had cheap costing spells. The text has been changed from “mana value of three or greater” to “mana value three or less.”

Settle the Wilds is getting a small buff, changing its casting cost from 1GG to 2G, instead. With the release of Streets of New Capenna, this change may make the Sorcery speed spell viable within multicolor decks. 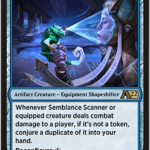 A total of nine small buffs were applied to digital-only A22 cards with the intention of increasing their resilience in combat while also making them harder to kill via removal spells.

All MTG Arena rebalance changes will go live on May 5 following the update.