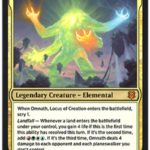 Nerfs and buffs are coming to MTG Arena via Alchemy, a new Standard digital-only format in Magic, hitting overpowered cards like Luminarch Aspirant and Alrund’s Epiphany while boosting underperformers such as Demilich.

Scheduled to release on Dec. 9, Magic Arena Alchemy will contain a total of 11 balance changes that were revealed during the Alchemy spoiler stream by Wizards of the Coast today. Balance changes typically take place on a monthly basis. Regular nerfs and buffs will prevent the Alchemy meta from becoming stale while also providing the devs with design space to experiment.

Regular balance changes will take place around four to six weeks after the release of a new Standard-legal set within MTG Arena. The Live format will get tournament representation, similar to the Historic format. And players who own either a rebalanced or original version of a card that’s been nerfed or buffed will own all versions of that card on MTG Arnea.

From a Goldspan Dragon and Faceless Haven nerf to Druid and Wizard Class buffs, here’s every balance change taking place within MTG Arena with the release of the Alchemy format.

Featured in the Alchemy spoiler stream, Alrund’s Epiphany is getting hit with a nerf. The extra turn Sorcery spell had its Fortell cost increased by one mana. And Alrund’s Epiphany will only create the bird tokens with Flying if it was Foretold prior to being played.

Esika’s Chariot was also hit with two adjustments. Upon entering the battlefield, the legendary Artifact vehicle will only create one 2/2 cat token. Instead of having a crew of four, though, the 4/4 vehicle only has a crew of two.

Other cards getting hit with nerfs include Goldspan Dragon, Faceless Haven, Omnath, Locus of Creation, and Luminarch Aspirant.

Landfall builds in Red and Green have a proper finisher via the buff applied to Phylath, World Sculptor. The elemental 5/5 will gain the keyword Trample. And a plant creature created by Phylath, World Sculptor that gets targeted with four +1/+1 counters upon Landfall triggering will also gain Trample until the end of turn.

Other buffs expected to take place with the launch of Alchemy on MTG Arena include Druid Class, Cosmos Elixir, Druid Class, and Demilich.

The Alchemy format within MTG Arena will launch on Dec. 9. All buffs and nerfs will also go into effect on Dec. 9 with the release of Alchemy and the 63 new digital-only Magic Arena cards.