After a crazy day of Modern Constructed, only one player went 8-0. 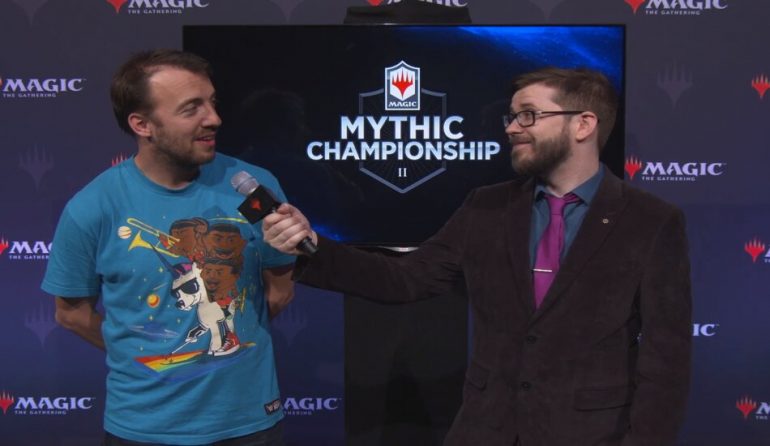 Modern Constructed, one the most exciting formats in Magic: The Gathering, lived up to its reputation during the first day of the second Mythic Championship in London.

The first part of day one at the Mythic Championship showcased the new War of the Spark expansion in Limited draft. After taking a short break, players moved on to the featured format, Modern Constructed.

Over 500 decks were submitted for the Modern format, with many wondering how the London mulligan and open deck rule would affect the metagame. Of those 515 decks, Tron was the most popular followed closely by Izzet Phoenix. U/B control was the fourth most-brought deck and proved to be dominant against the top two, much in part to the open deck format in conjunction with the London mulligan.

Another gamechanger was the detail put into decks with the intent of crushing Tron and Izzet Phoenix. Cards that normally would be found in sideboards were getting main deck play all day, much like the Magic: The Gathering Twitch stream card of the day, Surgical Extraction.

A rare from the Modern Masters 2015 edition, Surgical Extraction typically is a sideboard card. In London, it was the most played card of the day. Many players moved it to their main decks out of fear for the London mulligan, and to combat against prominent decks like Dredge, Tron, and Izzet Phoenix (Archlight Phoenix).

By the time the dust was settling, only two players maintained perfect records heading into round eight. Felix Innauer (Dredge deck) and Olivier Ruel (Esper Control) were the only players who didn’t have a loss or draw. Ruel suffered a loss in the first match, but came back in the next two, overpowering Innauer with Surgical Extraction, Teferi, Hero of Dominaria, and Jace, the Mindsculpter.

Ruel is a Magic: The Gathering Hall of Fame French player who hasn’t been a regular in the pro scene for some time. Despite choosing to focus on his family and other responsibilities, Ruel is a fan of the Modern format and likes to show up for Mythic events in the U.K. It’s not a guarantee that Ruel will make it to the top eight at the second Mythic Championship, but being undefeated all day is undoubtedly a solid start.

Magic: The Gathering Mythic Championship II will resume on Saturday, April 27. Like today, the first half will be dedicated to Limited War of the Spark draft, followed by another eight rounds of Modern Constructed.