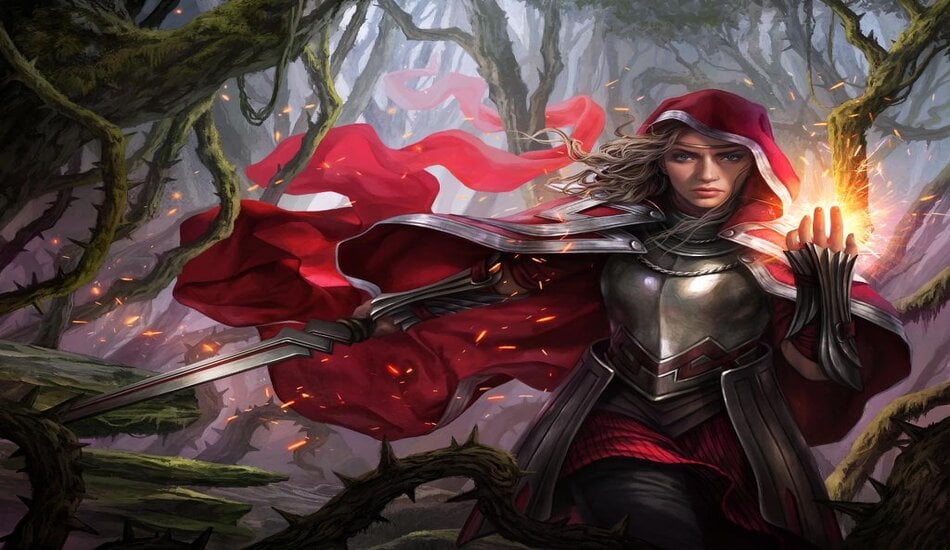 Three French Rowan Kenrith cards for the upcoming Throne of Eldraine set were leaked ahead of schedule, ruining the attempts made by Wizards of the Coast to reduce MTG spoilers.

Mark Rosewater gave Magic: The Gathering fans a sneak peek at the upcoming Throne of Eldraine set during San Diego Comic-Con, revealing that the main theme of the set will revolve around fairy tales. The artwork of Rowan Kenrith from Eldraine was revealed during the panel, but no cards were unveiled.

Someone in France apparently felt the MTG community needed to see the Rowan planeswalker cards ahead of schedule, leaking pictures (with poor cellphone quality) of three Rowan cards without the approval of WotC.

Rowan, Intrepid Sparkmage is one of an unknown number of Mythic Rare planeswalker cards in Throne of Eldraine. The text on the spoiled card is translated as follows:

If these leaked cards are legitimate, Rowan is likely the face of Throne of Eldraine—just like Chandra was in the M20 set. And Rowan, Intrepid Sparkmage is a gamechanger, much like Chandra, Awakened Inferno.

Despite the poor quality of the image, Rowan’s Bodyguard is a creature who gains plus three/plus zero if a player controls a Rowan planeswalker. It also has haste upon entering the battlefield, although its power and defense has been cut from the leaked picture.

The image quality of Rowan’s Valiant is also poor, but most of the text is salvageable. It says that when Rowan’s Valiant enters the battlefield, players can search their library for a Rowan, Intrepid Sparkmage. The player then reveals the Throne of Eldraine planeswalker and puts it in their hand.

Related: MTG shows off first look at Throne of Eldraine in Brawl

The release date for MTG Throne of Eldraine is set for Oct. 4, with prerelease events taking place on Sept. 28 and 29.