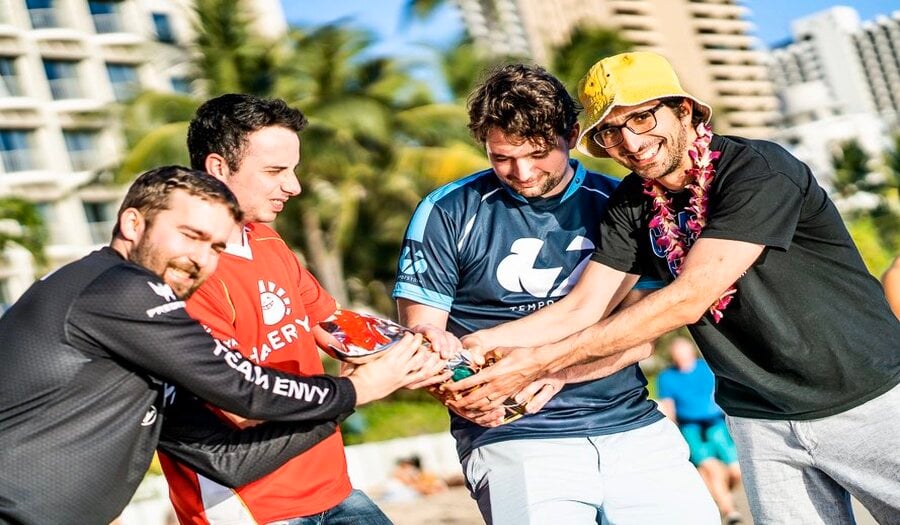 The initial field of 16 at Magic World Championship XXVI has been reduced to four, with $300,000 on the line.

After a handful of intense matches during day two at Magic Worlds, only four players remained. A full recap of day-two matches can be found here.

Carvalho and PVDDR were seated in the upper bracket of the top four, representing Team Hareruya and Tempo Storm. The winner of their match advanced to the grand final while the loser was placed in the lower bracket with Manfield and Nassif.

The first feature match of the day was between Carvalho and PVDDR in the upper bracket. Both players played the tempo game brilliantly, trying to outsmart one another and gain an advantage. PVDDR found himself behind thanks to smart choices from Carvalho. Dropping the Tempo Storm player down to five with Dream Trawler and Kenrith, the Returned King, Carvalho earned the first victory of the day.

Each player in game two had a strong opening hand, with PVDDR getting his Teferi, Time Raveler on the battlefield first. Utilizing Archon of Sun’s Grace while bouncing Omen of the Sea with little Teferi, PVDDR forced a game three with a victory.

Carvalho dropped his Teferi first, followed up by a Fires of Invention in game three without a counterspell response from PVDDR. Despite Carvalho dominating the battlefield, PVDDR cleaned up the board state with Elspeth Conquers Death with another copy and Shatter the Sky in hand. And his dominance continued, earning PVDDR a seat in the Magic World Championship final table.

Carvalho still had another chance to earn a seat at the final table, but first, he had to wait as Nassif and Manfield battled it out in the lower bracket. Manfield had been showing off the power of Embercleave all weekend in his Mono-Red Aggro build, but Nassif had four copies of Deafening Clarion as an answer in his Jeskai Fires deck.

Similar to yesterday’s lower bracket matches, Nassif and Manfield battled in best-of-three matches, rather than best-of-three games like the upper bracket. Manfield started game one of match one with a mulligan but still applied early pressure on Nassif. Utilizing Castle Embereth, Manfield quickly won the first game.

Nassif stabilized the board state just in time during game two, top-decking a Deafening Clarion one turn before Manfield went lethal over the top with Bonecrusher Giant. And the play paid off, earning Nassif a much-needed game win.

Game three, however, was all about Manfield and his Mono-Red Aggro build. And with one match win under his belt, Nassif was feeling the pressure heading into the second match.

Nassif had control of the board state in game one of match two but ran out of gas. Manfield was one turn away from lethal until Nassif top-decked a Cavalier of Flame to secure the win.

And with another game win for Nassif, it would all come down to match three to see who would play Carvalho for a chance to sit at the final table.

Manfield stacked battlefield wide during game one forcing Nassif to activate life gain from Kenrith, the Returned King to stay alive. Seeking a Deafening Clarion, Nassif came up dry and found himself in the hole once again.

Nassif was on the play to start game two but it almost wasn’t enough. Nassif dropped his Cavalier of Flame, dumped his hand, and found an Elspeth Conquers Death to remove Torbran. But Manfield top-decked a Robber of the Rich to secure the win and move onto play Carvalho in the lower bracket.

After just defeating one Jeskai Fires deck, Manfield was facing another against Carvalho. Competing in another best-of-three match format, Manfield wasn’t able to keep his win streak going during the first game. Game two also went to Carvhalo after sweeping the board with Deafening Clarion while Manfield flooded out on mana.

Game one of match two also favored Carvalho with his multiple copies of Aether Gust in the main deck in conjunction with Deafening Clarion. Manfield got a Torbran on the battlefield and attached Embercleave to it, but it wasn’t enough.

Needing a win, Manfield started game two off short on land but recovered quickly. And Carvalho fell too far behind to recover, forcing a game three.

Carvalho began game three in full dominance mode again, but Manfield wasn’t rolling over to give him the easy win. Believing in the Embercleave, Manfield regained the advantage after just getting wiped by Deafening Clarion. Carvalho failed to recover, flooding out on lands, and it would come down to match three.

Manfield was quick to capitalize on Carvalho starting match three short on land, landing a ton of damage. But upon finding his fourth land, Carvalho regained dominance of the battlefield. Dropping Kenrith onto the battlefield in conjunction with Fires of Invention, Carvalho earned a win.

Manfield maintained his concentration, however, pounding on Carvalho in game two and earning a win himself. It would all come down to one final game, with Carvalho dropping Teferi, Time Raveler on turn three and Fires of Invention on turn four. Unable to recover, Manfield’s run at Magic Worlds came to an end. And the final match of the day was a rematch between Carvalho and PVDDR.

Ending the day right where it started, with a match between Carvalho and PVDDR, $300,000 and a Magic World Championship title was on the line. To win the title, Carvalho needed to win three matches played in the best-of-three format, while PVDDR only needed to win two.

Game one between these two Magic veterans began with PVDDR playing Narset, Parter of Veils and Teferi, Time Raveler. Carvalho was unable to establish a board state while PVDDR found his win-cons and earned himself a victory. But Carvalho put up a great fight in game two, taking PVDDR down to four life. Seeking a top-deck of Kenrith, Carvalho didn’t find what he needed. And PVDDR earned his first match win in the finals.

Facing horrible odds, Carvalho wasn’t giving up his fight for a Magic World Championship title. He stayed one step ahead of PVDDR all throughout game one of match two, earning himself a much-needed victory. And he continued the win streak into game two, winning the match.

Game one of match three was a lengthy one. Carvalho applied pressure the entire game, but a possible misplay that ended with him having little Teferi countered gave PVDDR the advantage he needed to get back in the game and earn a win.

With one last victory needed by PVDDR to win the whole thing, Carvalho aggressively attacked with Legion Warboss after taking a mulligan. PVDDR desperately needed a Shatter the Sky to stay alive but he couldn’t find it and Carvalho tied up the match at 1-1.

Carvalho was a land shy of ending game three and forcing a third match, but even after discarding his hand with Cavalier of Flame, he couldn’t find it.

Carvalho had another chance the next turn but chose a different line. It could have backfired, but it worked out for Carvalho, forcing a fourth match in the finals of Magic World Championship XXVI.

Game one went to PVDDR and the pressure was once again on Carvalho to pull off two wins in a row. Carvalho started game two with a two land opening hand and multiple red cards, missing white and red mana. Rolling the dice, he took a gamble and was punished.