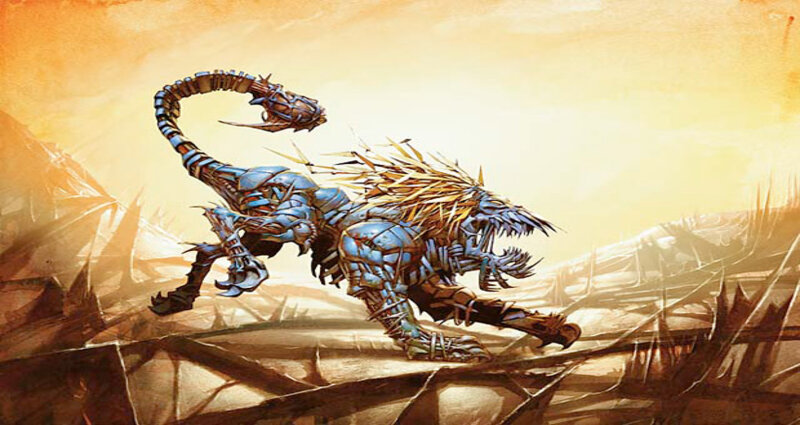 Wizards of the Coast introduced Magic: The Gathering players to Sparkhunter Masticore today, an Artifact creature within Core Set 2021 whose purpose is to destroy planeswalkers.

Since the release of War of the Spark last May, planeswalkers have become public enemy No. 1 in the Standard format. Questing Beast was designed in the Throne of Eldraine set as a means to deal with them. But with the upcoming release of M21, which features the planeswalker Teferi as the “face of the set,” the MTG design team stepped up their game with the creation of Sparkhunter Masticore.

Sparkhunter Masticore is the fifth masticore in the history of Magic. Masticores are grounded versions of Manticores in MTG, metalic beasts that resemble a lion.

By designing Sparkhunter Masticore as an Artifact creature with a CMC of three (no color specifications), players can include the planeswalker hunter into any type of build. It’s also a solid choice in just about every sideboard, with the exception of Aggro due to the additional cost attached to it. Discarding a card is a downside but a worthwhile one to pay in most archetypes due to Sparkhunter’s low mana cost.

Questing Beast may have had an exuberant amount of abilities and a powerful strike against planeswalkers, but Sparkhunter Masticore has a few tricks up its sleeve too. The Artifact creature can ping any planeswalker for one damage at the low cost of one mana.

If Sparkhunter Masticore gets targeted by an opponent’s spell, its controller can save it by making it indestructible at the cost of tapping three mana. And with a health of four, it’s slightly more difficult to remove even if you can’t tap the three mana for indestructibility.

The M21 set is scheduled to release digitally on June 25 with an official launch on July 4.