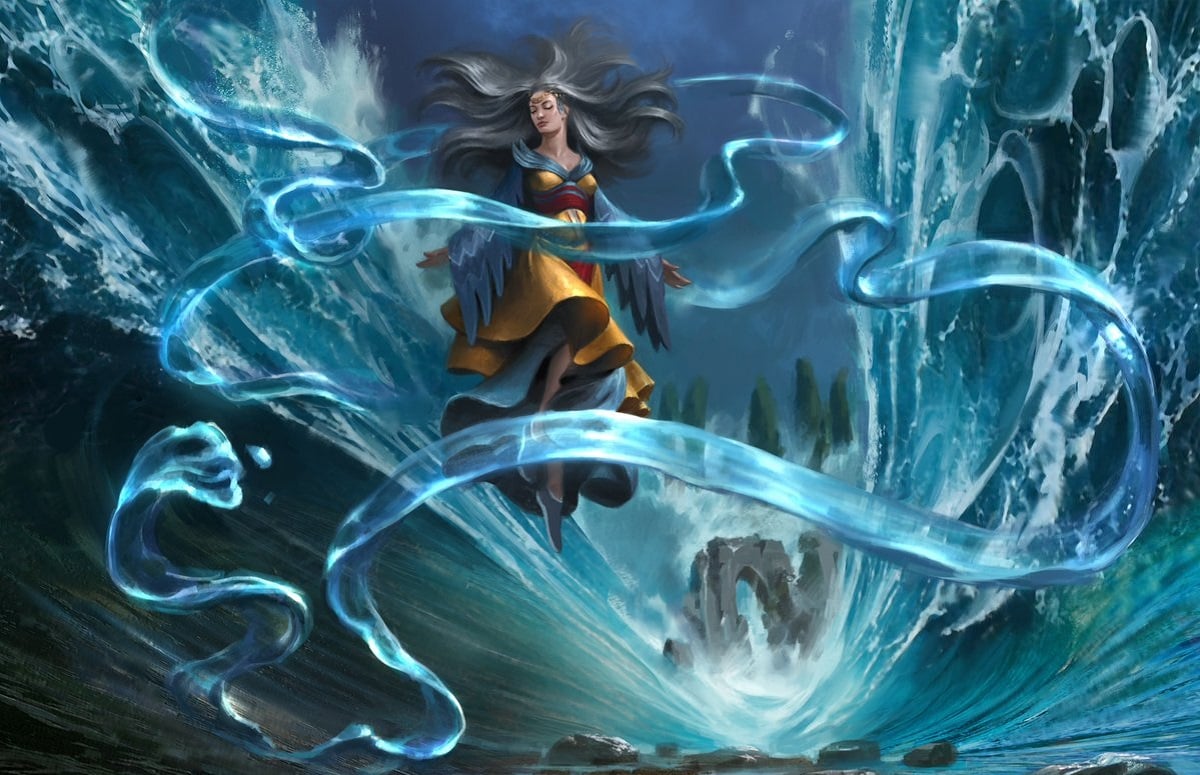 The top Standard decks in Magic: The Gathing right now are all well-known, especially among the ranks of Arena grinders. But, deep in the C-tier decklists, there’s a little gem that’s perhaps some of the most fun—at least, if going infinite is your thing.

OmniTears is a janky combo deck to be sure, but with Omniscience rotating out in a month, there’s never been a better time to give it a go.

OmniTears essentially runs on a single play using its namesake cards, casting Flood of Tears and playing Omniscience for free.

So how do you win? Well, the idea is to have a bunch of cantrip permanents (a cantrip in Magic is a cheap spell that draws you a card) that you can recast, drawing you into another Flood of Tears, and repeating this process until you have your win condition.

Some variants of this deck, like Ali Eintrazi’s, aim to cast Thousand-Year Storm and Inescapable Blaze for lethal damage. Instead, we like going for Jace, Wielder of Mysteries to close out games by drawing through our library.

This recommended decklist aims to survive until you can pull off the combo and mill yourself quickly to victory. How do you get there? The key is all about permanents.

Some permanents, like Risen Reef and Gift of Paradise, provide ramp, life, and card advantage. Oath of Kaya serves as spot removal and Guild Globe pulls its weight as card draw and mana fixing if needed.

Then, add in some planeswalkers. They double as permanents and they’ll often be the targets of your opponents’ attention, leaving you free to continue building toward your combo. Narset, Parter of Veils digs for the pieces you need, while Tamiyo, Collector of Tales and Teferi, Time Raveler serve as great recursion and card advantage.

The only real removal is a single copy of Time Wipe. But four copies of Root Snare serve the same purpose of delaying until you have the combo. Root Snare’s cheap cost and practically zero role in the meta will often catch opponents flatfooted. You can also cast Flood of Tears before getting Omniscience, just to stall out the game that much longer.

Mastermind’s Acquisition is a key part of the deck. Its first role is in allowing you to bring in a card from your sideboard to break up an opponent’s strategy. Don’t forget that it can also just bring up your combo pieces if you’re still missing one. Theoretically, you can skip Mastermind and just run Jace in the main deck, but we prefer having options.

The main role of the sideboard is to hide Jace until you need him. His abilities really don’t help you get to the combo—all you need is his passive at the very end of the game. Zacama, Primal Calamity is also present in the sideboard in case you need an alternate win condition against certain decks.

The remainder of the sideboard is all about survival. One of the biggest weaknesses of OmniTears is the two most oppressive planeswalkers in Standard. Narset blocks all your cantrips and Teferi shuts down Root Snare. Arm yourself with The Elderspell and Star of Extinction to get rid of them as soon as possible.

There’s also a whole suite of removal spells: another Time Wipe, Ritual of Soot, Cry of the Carnarium, Noxious Grasp, and Legion’s End. Each of these is strong against various meta decks that you’re sure to run into—just make sure you pick the right one.

Finally, a second copy of Tamiyo and Scholar of the Ages grant inevitability in the form of bringing back combo pieces (or Mastermind’s) from the graveyard to continue bringing the pain.

Playing this deck definitely requires patience, especially with the timing of casting Root Snare. It all starts with selecting your opening hand. You don’t want any combo pieces at first, so select hands with lots of cantrips and ramp.

You’ll also need to be reactive to your opponent. If they get aggressive, use that removal and throw in some tempo plays like bouncing their best creature with Teferi. When it comes to casting Root Snare, it’s usually better to let your life drop low before casting it, especially if you have better plays in the meantime.

Don’t forget that decks like Mono Red, Vampires, and Esper Hero have access to non-combat damage spells that get around Root Snare. It also may be worthwhile throwing a planeswalker into the fray even if they won’t survive. You can make it up to them later once you’ve gone infinite.