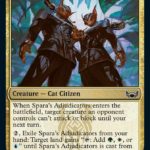 A cycle of five Magic: The Gathering suspend mana-fixers were included within the Streets of New Capenna set, showcasing the ability to enchant a land via exiling the creature card for extra colors that can get cast later during a game as the creature itself from exile.

Each of the five Streets of New Capenna (SNC) suspend mana fixers attempt to provide players with the ability to potentially hit three different mana colors by turn three.

On paper, the concept is neat.

But this cycle of five cards has too many downsides, making them no more than an average New Capenna Draft Limited card at best. Playing the suspend mana fixers in Sealed and prerelease events, however, is different.

The CMC on all five SNC mana fixing multicolor creatures ranges from five to seven. They are extremely expensive cards to Draft that won’t function as a top-end finisher. In addition to the high mana costs to cast, players will need to invest two mana of any color to essentially enchant a land by exiling the creature, allowing the land to tap for up to three different MTG colors.

In a Limited Draft format, these five cards aren’t worth grabbing as a top-pack pick. Especially since the New Capenna Limited format has a variety of other mana-fixers built into it.

Each of these various mana-fixers has a higher priority within a Draft over the cycle of mana-fixing creatures. Players should expect the Common rarity multicolor creature cards to wheel, making them a potentially good late-pack pick.

Prerelease and Sealed New Capenna events don’t operate like a Draft, though. Players don’t get to choose what cards they want from a pool of players but have to settle for what is in the six SNC booster packs instead. Sealed and prerelease events often play at a slower pace as well, making it easier to spend two mana to attach a mana-fixing creature to a basic land via exile.

The suspend multicolor mana-fixing creatures aren’t bad cards, but they are not great. Players should be careful not to overrate these New Capenna cards in Limited and use them when needed for mana options, not for the creatures themselves.