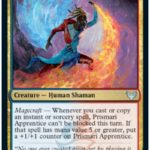 Representing the five colleges within Strixhaven: School of Mages are a cycle of apprentices with an Uncommon rarity, utilizing the new Magic: The Gathering mechanic Magecraft.

Scheduled to release in April, the Strixhaven: School of Mages (STX) set will feature five colleges that are represented by duel enemy mana colors. Each college contains an apprentice with the same colors and a new mechanic in Magic called Magecraft. The new mechanic thematically ties into the STX set while offering players a bonus whenever they cast an Instant or Sorcery spell.

There are five colleges at Strixhaven University: Prismari, Witherbloom, Lorehold, Quandrix, and Silverquill. Witherbloom has an enemy color theme of life and death, according to head designer Mark Rosewater, while Lorehold College has a conflict between chaos and order. These color conflicts are represented through the apprentices Magecraft bonus.

It’s unlikely the apprentice cycle cards will see a large amount of gameplay in Standard Constructed. Each has a base stat of 2/2 and their playability depends solely on the value found in their Magecraft bonus. Several of the apprentices should thrive within the Limited format, though. From the Shaman Prismari Apprentice to the mathematician Wizard at Quandrix College, here are the five apprentices of Strixhaven University.

Being able to attack without being blocked is a big deal in the Magic Limited format. Prismari Apprentice gains value from the counter pump too, but it often won’t get any bigger than a 4/4. But an unblockable 4/4 can finish off opponents, making UR an archetype worth drafting. The flavor of Prismari Apprentices Magecraft is on the mark and it could open the door for some wild big spell builds.

Witherbloom College has a swampy reputation at Strixhaven University, which explains its apprentices weak Magecraft bonus. Witherbloom Apprentice is an average two-drop that will need support in order to pop off. Aggro Limited builds might want to use it for the one damage ping, or a life gain deck in BG might become a Limited reality.

Lorehold Apprentice has a Magecraft bonus that synergizes nicely with its school’s motto. Spirits allegedly play a major role in Lorehold magic, and RW typically has creatures that like to produce tokens. Get enough Spirit tokens onto the battlefield and watch your opponent’s life dwindle quickly.

Similar to Witherbloom Apprentice, the Silverquill Apprentice Magecraft bonus won’t have a major impact on the STX Limited meta. Most likely the Warlock will act as a chump blocker to prevent early damage from an opponent. Unless WB makes use of Equipment or Aura’s, Silverquill Apprentice will get passed over in Draft more than it gets picked.

Quandrix Apprentice is a solid two-drop providing ramp with its Magecraft bonus. Green and Blue Control builds thrive on ramp and will likely take advantage of the Human Wizard. Midrange builds will also benefit from Quandrix Apprentice, never having to worry about mana while having the flexibility to craft with big evasive creatures.