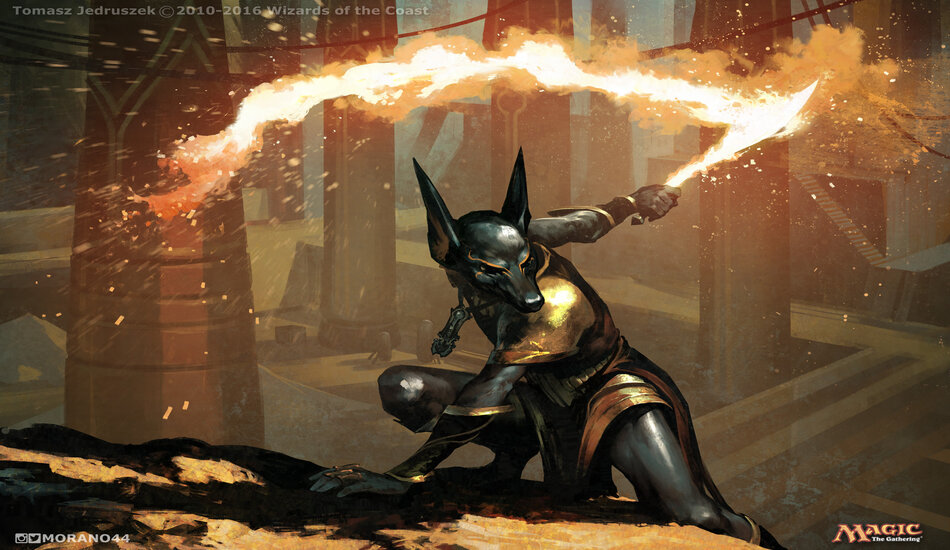 A total of 25 Historic Anthology IV cards were added to MTG Arena in early March, but only a few are getting played at the Kaldheim Championship.

Historic Anthology IV was released on March 11, around two weeks prior to the KHM Championship, which features eight Swiss rounds in the Historic format. The fourth Anthology set added to Historic had a handful of good cards, of which three are having a direct impact on the meta: Death’s Shadow, Coldsteel Heart, and Flameblade Adept.

Fans watching the KHM Championship from March 26 to 28 will see these three cards in Rakdos Arcanist, Five-Color Niv-Mizzet, and Boros Cycling decks.

A staple in Modern and Legacy Magic formats, players were excited about the addition of Death’s Shadow in Historic Anthology IV.  Despite the hype, only one Rakdos Arcanist deck was entered for the KHM Championship.

Death’s Shadow works well with cards like Thoughtseize, Kroxa, Titan of Death’s Hunger, and Dreadhorde Arcanist. Rakdos Arcanist decks have potential in the Historic format but are weak to Jund Sacrifice builds—of which 66 KHM Championship competitors have chosen to play, representing 31.3 percent of the field.

Coldsteel Heart is an Artifact that fixes colors for multicolor deck builds while also providing ramp. The Snow Artifact quickly found its way into Five-Color Niv-Mizzet decks of which three competitors at the KHM Championship are playing in the Historic Format Swiss rounds. The two-drop Artifact is expected to pump Niv-Mizzet, according to Magic’s numbers man Frank Karsten.

Cycling bursts to S-tier status with Flameblade Adept. The Jackal Warrior has a CMC of one Red with 1/2 stats. Flameblade also has Menace and gains +1/+0 whenever its controller discards a card or activates Cycle. Difficult to block, Flamebalde Adept helps the Historic format feel a tad more like Modern.

In conjunction with Hollow One, added to Historic with Amonkhet Remastered, Flameblade Adept has made its way into several Boros Cycling decks at the KHM Championship. Representing 2.4 percent of the field through five decks, Boros Cycling builds will need the one-drop Jackal to pop off in order to make the top-eight.

The KHM Championship, scheduled to take place from March 26 to 28, is the first major Magic tournament to feature Historic Anthology IV cards.