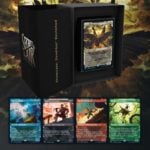 Wizards of the Coast has revealed a return to the original ZEN set with Magic: The Gathering Secret Lair Zendikar Revisited.

Available for only 24 hours on Sept. 25, the Zendikar Revisited Secret Lair features a regular and foil version. The drop contains a total of five cards: Admonition Angel, Roil Elemental, Zulaport Cutthroat, Warren Instigator, and Avenger of Zendikar. Each of the ZEN cards comes with a Showcase art style and frame by artists Matteo Bassini, Anato Finnstark, Bastien Grivet, Daniel Lieske, and Dominik Mayer.

Collectors will also receive a single-use MTG Arena code for one Showcase Zendikar Revisited themed sleeve for when it becomes available on the digital platform.

The artwork for each of the five Secret Lair Zendikar Rising cards is new, but some of the cards have had recent reprints in Magic. Admonition Angel can be found in the upcoming Zendikar Rising Commander preconstructed deck, Lands Wrath. Avenger of Zendikar, originally printed in Worldwake, was also recently reprinted in Double Masters. And the only Uncommon in the Secret Lair drop, Zulaport Cutthroat, was recently reprinted in the Ruthless Regiment Ikoria Commander 2020 deck.