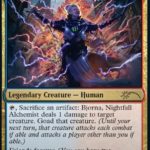 Mechanically unique Stranger Things Universes Beyond cards from Secret Lair are getting Magic: The Gathering reprints that will show up within Streets of New Capenna set booster packs.

Universes Beyond cards in MTG are legal to play in Legacy, Vintage, and Commander formats. The Stranger Things cards from the Secret Lair drop, which took place last year, will soon become available to Magic players via reprints that will show up within The List spot via Streets of New Capenna (SNC) set boosters. Collectors and players can expect the reprints to show up in around one of eight set booster packs.

Each of the nine Universes Beyond Stranger Things cards has a new name and art showcased in their MTG reprint variant while keeping the same text, mechanics, abilities, and stats from the originals that were released via the Secret Lair drop in October. These mechanically unique cards will have an MTG Innistrad theme showcased in the artwork and contain the Friends Forever mechanic. 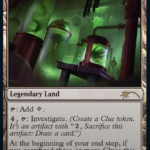 The Stranger Things reprints are the first Universes Beyonds cards that cross over with a major IP to get an MTG reprinted version. Players are still waiting on The Walking Dead reprints, which may show up later this year, and are eagerly anticipating reprints of the recent Street Fighter cards that may also appear later this year or in early 2023.

Players can start collecting and using the Stranger Things MTG reprints via the global tabletop launch of SNC on April 29.