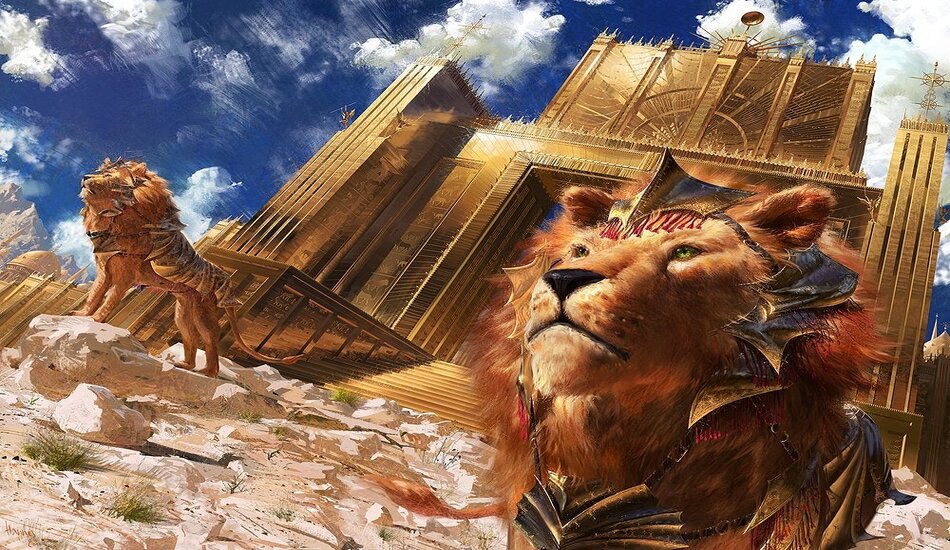 Aggro and Midrange builds have a cheap and powerful creature to use with today’s Theros: Beyond Death spoiler, Bronzehide Lion.

Bronzehide Lion is a direct reference to the hide from the Nemean lion Hercules wrestled to death. The lion’s hide wasn’t penetrable and it lived on as a cloak for Hercules after he killed it. Bronzehide Lion in Theros: Beyond Death (THB) gains indestructible at the cost of one Green and one White mana and it lives on beyond its death as an Aura.

“When Bronzehide Lion dies, return it to the battlefield,” the card reads. “It’s an Aura enchantment with enchant creature you control and ‘GW: Enchanted creature gains indestructible until end of turn,’ and it loses all other abilities.”

As a 3/3 creature with a CMC of two, Bronzehide Lion is a solid two-drop in a Selesnya Aggro and Midrange build. It also has potential in Bant builds, using a bounce spell such as Granted or Unsummon to return Bronzehide Lion back to hand as a creature. Teferi, Time Raveler’s minus-three ability would work as well.

Bronehide Lion does have a couple of weak spots, though. If it dies and there isn’t a creature on the battlefield it can attach itself to as an Aura, it goes to the graveyard. And while gaining indestructible is a sweet benefit, today’s THB spoilers revealed Shadowspear, an artifact equipment that removes indestructible and hexproof from creatures.