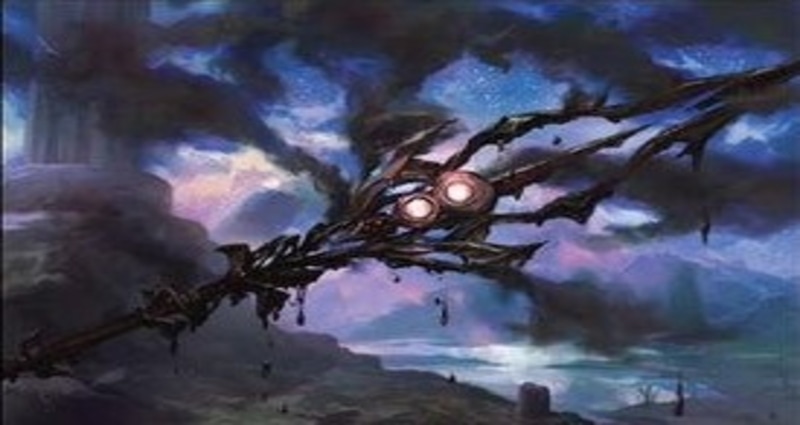 An answer to Gods with indestructible and hexproof creatures dropped in today’s Theros: Beyond Death spoilers with the equipment artifact, Shadowspear.

Set to release on Jan. 24, MTG’s Theros: Beyond Death (THB) contains seven indestructible Gods and only a handful of removal spells that can deal with them. But that all changed today with the reveal of Shawdowspear.

Shadwospear is an equipment artifact that gives a creature +1/+1, Trample, and Lifelink. It can also remove hexproof and indestructible from a creature at the cost of one mana until the end of turn. Shadowspear has a low cost of two mana to equip and can activate its mana ability even when it isn’t equipped.

The lore behind Shadowspear explains why it’s a God killer, too. Elspeth nabs Heliod’s spear out of her nightmares and brings it into the living world, according to the story card.

Embercleave has been one of the most powerful equipment artifacts in Standard since the release of the Throne of Eldraine set. Shadowspear isn’t quite as powerful, but it’s a solid addition to any Aggro and Midrange build. It can equip to Fervent Champion at no cost and can give low-cost creatures like Lovestruck Beast and Rotting Regisaur Trample and Lifelink.

Shadowspear won’t end a match as Embercleave can, but it’ll help set up that finishing blow much quicker. Its mana ability is simply the icing on the cake, providing additional versatility in a meta that’s bound to be dominated by indestructible Gods.

In the THB Limited format, Shadowspear is a top pick and may even turn out to be a bomb. It’ll fit into any color deck, providing value no matter what creature it’s equipped to. But it’ll likely see the most play in Aggro and Midrange builds.