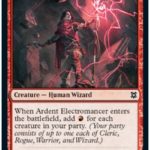 Tap into Magic: The Gathering mechanics like Party and Landfall in conjunction with powerful Red creatures and cheap removal when Zendikar Rising launches this month.

Scheduled for an official release on Sept. 25 and via MTG Arena on Sept. 17, ZNR contains a number of solid MTG Red cards worth playing in the Limited format. There are bombs like Magmatic Channeler and Moraug, Fury of Akoum, but there’s also a healthy number of Common and Uncommons to round out various archetypes. From powerful creatures with Trample to Instant burn spells, here are the best MTG Common and Uncommon red cards within ZNR.

Common MTG Red cards in ZNR have an average rating of around 2.5 to 3 out of five. There are four that stand out from the crowd, though, and several that deserve honorable mentions. Cleansing Wildfire and Spitfire Lagac will both work nicely in a Landfall–themed build. In a Party strong build, Synchronized Spellcraft is a sold finisher/removal Instant to pick up. And Scorch Rider has potential thanks to its (1R) Kicker that provides haste until the end of the turn.

Ardent Electromancer is like the Party version of Burning-Tree Emissary, adding Red mana upon entering the battlefield for each creature in your party. Even without a solid Party theme, the human wizard will create at least one extra Red mana during turns three through five.

As a five-drop with 4/5 stats, Pyroclastic Hellion is a decent pick. In a Landfall theme build, it creates additional value. And even without Landfall, returning land to hand in order to deal two damage directly to an opponent makes the Hellion worth playing.

Similar to Lightning Strike, never underestimate the power of three damage to an opponent’s face. Roil Eruption also has the added benefit of Kicker for five of any color mana, dealing five damage instead. With Kicker, Roil Eruption has a CMC of 6(R), which is a tad pricey but worth paying when it can immediately end a game.

There’s a total of four Uncommon MTG Red cards worth picking up and two honorable mentions that are both Instant removal spells. Cinderclasm is a two-mana Instant that deals one damage to each creature on the battlefield. It’s great against Aggro decks and also has Kicker, dealing two damage to every creature for a total cost of 1RR. And Spikefeild Hazard is an Instant Modal DFC that deals one to any target. If that target should die, it gets exiled instead.

As a four-drop 3/3 with an ability to ping any target, Rockslide Sorcerer is worth including in a Limited Draft build. The human wizard has a defense of three, making it harder to remove him, and will provide more than enough value in UR builds.

Without Trample, Skyclave Geopede is an honorable mention. But with a starting power of three, easily increased to five thanks to Landfall, the insect can cause a good amount of damage. Skyclave Geopede is also an ideal creature to attach an Equipment too, or pump with a combat trick.

Thundering Rebuke is a Lava Coil without the exile bonus. It will, however, remove plenty of troublesome creatures. And Thundering Rebuke can even hit planeswalkers, which is solid for a two-cost Sorcery spell in Limited.

Players can begin drafting MTG Red cards via MTG Arena on Sept. 17, at prerelease events on Sept. 18, and via the official tabletop release on Sept. 25.