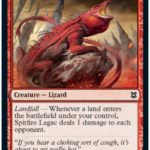 Landfall is returning to Magic: The Gathering Standard as an ability in Zendikar Rising, providing a number of triggered abilities that win matches in either Limited or Constructed formats.

First introduced to Magic during the original Zendikar, Landfall is an ability in ZNR that triggers abilities on cards that a player controls when they put a land onto the battlefield. The ability can be something simple and short-term, like a pump until the end of a turn on cards such as Akoum Hellhound and Kazandu Mammoth.

Landfall abilities can also change the course of a match, providing multiple abilities each time a land is played, or trigger multiple abilities from just one land. From Common to Mythic Rare, here are the best ZNR Landfall cards to play in Limited and Constructed.

WotC gave Commander players a gift with Spitfire Lagac, enabling ping builds to go wild. The lizard deals one damage to each opponent every time a land enters the battlefield. As a four-drop with 3/4 stats, Spitfire Lagac is also a solid pick in Limited since it’s able to widdle your opponent’s life down with every Landfall.

Territorial Scythecat is a solid Common green Limited card due to the cat having Trample. It’s a three-drop 2/1 with Trample that increases its stats +1/+1 every time a land enters the battlefield. A majority of Common landfall cards in ZNR get pumped “until end of turn,” but the Territorial Scythecat’s counter is permanent. Expect this Common to see some play in Standard and definitely via Historic.

Flying in Limited typically creates huge advantages, especially when the creatures have a low casting cost like Fearless Fledgling. The Griffin is a two-drop 1/1 who gains a +1/+1 pump and flying until the end of turn with Landfall. Fearless Fledgling is a great early-game creature who can swing over the top until at least turn three or four in ZNR Limited without being blocked.

While Felidar Retreat isn’t necessarily a great Constructed Enchantment due to its casting cost of 3(W), it might be a solid sleeper in Limited. Players get to choose one of two options with Landfall: create a 2/2 token for go-wide strategies or place a +1/+1 counter on any creature they control. Felidar Retreat is splashable in any Limited archetype, adding just enough power to win games when played correctly.

Lotus Cobra is a Zendikar reprint last seen in Iconic Masters, providing one mana of any color with Landfall. It’s not a great Limited creature but has a ton of potential in Constructed. Lotus Cobra is susceptible to just about any type of removal, but it only takes a turn or two to splash any color mana with its Landfall ability for an advantage in a match.

Omnath, Locus of Creation is a four-drop Four Color Legend that’s a 4/4 and loaded with bonus abilities. For starters, it draws a card upon entering the battlefield. Add in its Landfall abilities and the Elemental goes wild with Lifegain, mana splashing, and direct damage to each opponent and their planeswalkers. Omnath won’t likely see much Limited play but watch out for the Elemental lord in Constructed.

Nissa of Shadowed Boughs is a bomb in Limited and a solid planeswalker in Golgari Constructed. Her loyalty counter abilities are solid on their own and she has the added benefit of Landfall, putting a loyalty counter on her every time you place a land onto the battlefield. Due to Nissa’s Landfall ability, she can cast her ultimate when played, stick around longer on the battlefield when targeted, or simply turn that land played into a 3/3 Elemental creature with Haste and Menace until the end of turn.