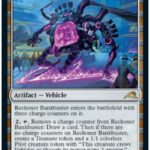 Cycles for the upcoming Kamigawa: Neon Dynasty Standard-legal set continued to flesh out, along with powerful Magic: The Gathering cards at all rarities.

The start of February kicked off with a number of Kamigawa: Neon Dynasty (NEO) spoilers worth playing. Dot Esports had the privilege to exclusively preview Reckoner Bankbuster, a Rare Vehicle that is likely Standard playable, and a bomb in Limited. The MTG color Black got March of Wretched Sorrow, filling in the Mono-Black spot within the NEO March cycle.

Also dropping in Black was the legendary land Takenuma, Abandoned Mire, along with the Sorcery speed removal Soul Transfer. And the Color Blue popped off with NEO spoilers today via the reprint counterspell Essence Capture, along with the Blue Invoke cycle card, Invoke Whirlwind.

Here are the best NEO spoilers from Feb. 1. 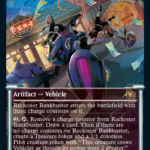 Players can test out every NEO spoiler from Feb. 1 when the Standard-legal set launches digitally on Feb. 10. A global launch is scheduled to take place on Feb. 18.