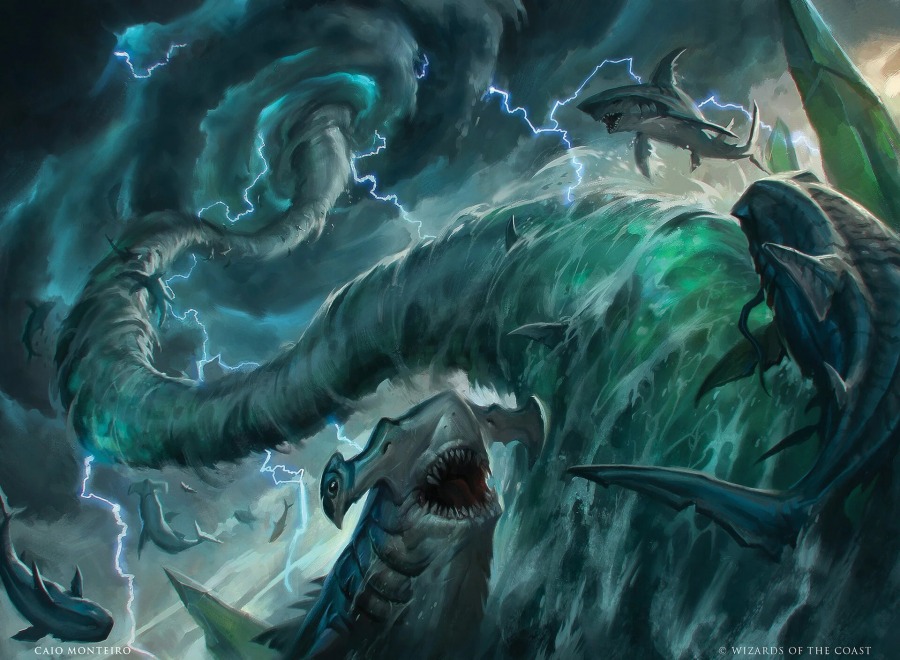 Andrew Cuneo entered day one of the Kaldheim Championship at last place in the Magic Pro League without a top finish in the last two set championships. Cuneo ended the day undefeated through seven rounds.

Doing it his own way in Historic with Dimir Control and running tournament favorite Sultai Ultimatum in Standard, Cuneo finally started to run hot, earning himself a 7-0 record going into day two. He joins Germany’s Arne Huschenbeth as the only two undefeated players remaining.

Cuneo ended his day-one run against Ben Zahneissen in a control mirror. With the game tied, Cuneo crushed Zanneissen in game three thanks to a great piece of sideboard tech in Thought Distortion. Zanneissen had a hand full of spells that were exiled in the biggest Thought Distortion casting of the past year.

Cuneo closed the game out with Shark Typhoon, a reliable finisher for control decks. Dimir Control is an unconventional pick in Historic. Cuneo is the only player running the deck. Playing rogue strategies is nothing new for Cuneo but unlike past tournaments, this gamble is paying off.

For Cuneo, a top finish could earn him up to four points and greatly improve his MPL standings. The bottom-eight players in the MPL will be relegated to the Rivals League. Cuneo is five points away from securing a spot in the Rivals Gauntlet playoffs which would give him a chance to retain his MPL spot.

Huschenbeth is the surprise star of the tournament. A player on the outside of the Rivals League, Huschenbeth is looking crack into the upper echelon of Magic players. He qualified through the January 2021 Qualifier Weekend.

The German upstart piloted Dimir Rogues in Standard and Orzhov Auras in Historic. Orzhov Auras looked particularly impressive during the round seven matchup against two-time World Champion Shahar Shenhar. Both players entered the game undefeated, but it was Huschenbeth who controlled the game. Orzhov Auras is filled with threats that return from the graveyard which favors long games.

To qualify for day two players needed to earn four wins on day one. Here are all the players with at least six wins going into day two.

Austin Bursavich has been relatively quiet since joining the Rivals League after winning the 2020 Grand Finals but is in a solid position to earn a top-eight spot. Mike Sigrist drew a lot of attention from the broadcast deck for his Five-Color Niv-Mizzet deck during the last Historic rounds.

Two notable absences from day two are reigning World Champion Paulo Vitor Damo da Rosa and Gabriel Nassif. The pair are the top two players in the MPL standings coming into this weekend. Both players finished with 3-4 records and are not qualified for day two. Even without points from the Kaldheim Championship, Nassif and Damo da Rosa will remain in the top four of the MPL.

Brad Nelson and Ondřej Stráský are in third and fourth place in the MPL and qualified for day two. A strong top-eight run for either player could catapult them to the top of the standings going into Strixhaven split.

The metagame was as diverse as the plethora of fresh faces at the top of the standings through day one. Out of the top 10 in Historic and Standard, only Jund Food and Sultai Ultimatum are represented by more than one decklist. Both have two spots. The rest of the top 10 is filled with different archetypes.

In Historic, Golgari Midrange, Dimir Control, and Boros Cycling are some off-the-radar strategies that are performing well and could be represented in the top eight. Sultai Ultimatum is still the deck to beat in Standard but it isn’t overwhelming like other great decks of the past year.

Naya Adventures seems to be the biggest loser in Standard. After a strong presence during the February League Weekend, Naya Adventures has been phased out in this tournament in favor of the classic Temur Adventures strategy.

Day two of the Kaldheim Championship will start at 11am CT tomorrow where top eight will be locked in. The Standard double-elimination top-eight bracket starts on at 11am CT on March 28.