With the Throne of Eldraine set available on MTG Arena, Magic: The Gathering streamer Amazonian figured out how to use Seven Dwarves in Standard.

The Throne of Eldraine set is still four days away from an official release and Magic: The Gathering players are creating anything from the jankiest jank to top-tier decks on MTGA. Amazonian decided to try some jank on her stream today, attempting to pop off with the Seven Dwarves on MTG Arena. And she succeeded in true fairy tale grandeur.

To pop off the Seven Dwarves combo, Amazonian first placed seven copies of Seven Dwarves in her build as the text on the card requires. 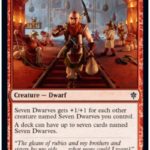 Amazonian also included Mirror March from Ravnica Allegiance, which flips a coin every time a non-token creature enters the battlefield. The odds of Mirror March creating more than one token copy are decent, according to a Reddit user.

Amazonian managed to get Mirror March to flip six times and then proceeded to cast Spark Double (WAR) on the original copy of Seven Dwarves. This kicked off Mirror March again, creating one more token and making each of the Seven Dwarves a 10/10 with haste.

The Throne of Eldraine set releases via tabletop on Oct. 4. Magic players who don’t want to wait can play the set in full on MTG Arena now.