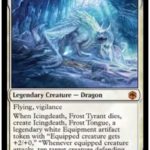 Releasing globally on July 23, the Dungeons & Dragons: Adventures in the Forgotten Realms (AFR) set will contain six Mythic Rare, one Rare, and five Uncommon dragons. Prior to today’s previews, the only AFR dragon that had been spoiled was Tiamat. Showcasing dragons at each of the three rarities, five dragons were revealed today: Icingdeath, Frost Tyrant, Black Dragon, Green Dragon, Ebondeath, Dracolich, and Adult Gold Dragon.

A cycle of chromatic dragons was also revealed today via the Black Dragon and Green Dragon. Based on D&D lore, chromatic dragons each have a color and an evil alignment. Each of these dragons is of the Uncommon rarity in AFR, showcasing an enter-the-battlefield (ETB) trigger via a breath attack. 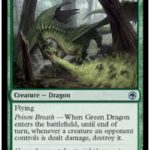 Green Dragon has Poison Breath, destroying any opponent’s creature that was dealt damage. Black Dragon features Acid Breath, hitting an opponent’s creature with -3/-3. Both breath attacks are triggered as an ETB effect and only last until the end of turn.

The Adult God Dragon is a Rare MTG card containing three keywords and no additional abilities. It’s a five-drop in RW with 4/3 stats that has Flying, Haste, and Lifelink.

Dragons and the AFR set will drop digitally on July 8 via Magic Online and MTG Arena. The tabletop global release will take place on July 23.