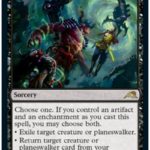 Limited format bombs within the Kamigawa: Neon Dynasty set have the potential to warp the meta via a number of Magic: The Gathering cards of various rarities.

A bomb in the MTG Limited format is a card that pulls you into a specific color or archetype when drafting. Not all bombs have a rarity of Mythic Rare or Rare, although the Kamigawa: Neon Dynasty (NEO) set is packed with at least 20 higher rarity cards that are worth picking up during a Draft or building around in Sealed. The legendary spirit dragons are a good example of Mythic Rare cards that can pop off and end games, along with a Rare like Satoru Umezawa, who gives all creature cards in hand Ninjutsu.

Common and Uncommon cards that have the potential to become bombs include Hotshot Mechanic, the best Common to pull a player into White that runs vehicles. The fox pilot falls just short of being a bomb, though, due to the questionable impact vehicles will have on the NEO Limited meta.

Limited format bombs pull players into building around the card because of the impact it will have on their deck. At the time of writing, the NEO Limited meta is mostly unknown since the set hasn’t officially launched yet via digital or tabletop. The cards listed are speculated bombs and this article will get updated following the digital and global launch of the NEO set.

From Ninjutsu enablers to the found emperor of Kamigawa, here are the best NEO Limited bombs at all MTG rarities in ascending order.

Selfless Samurai is an Uncommon rarity card that should pull a player into the samurai/warrior archetype as it is better than the NEO signpost card Asari Captain. It also can slot into any Limited Draft build with the MTG color White, due to providing another creature with Indestructible when sacrificed.

Containing an ability similar to Landfall, Roaring Earth grants a +1/+1 counter on any target creature or vehicle when a land enters the battlefield. It also has Channel, a mechanic that can’t get countered, potentially creating a very large creature with Haste that is still a land. Roaring Earth can slot into any Green build and is a solid option to splash in the other NEO archetypes. 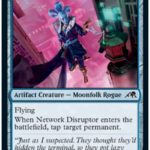 Both Network Disruptor and Thousand-Faced Shadow are bombs for builds that support the Ninjutsu mechanic and both are one-drops in the MTG color Blue that have Flying. Network Disruptor is a NEO Common that taps a target permanently upon entering the battlefield. And Thousand-Faced Shadow creates a copy token upon attacking that is a clone of another attacking creature.

Oni-Cult Anvil is the best signpost Uncommon within the NEO Limited format that supports the Black and Red archetype. The tokens it creates stick around, creating more sacrifice fodder for the build while also providing drain and gain. And it synergizes nicely with the Uncommon Red goblin Sokenzan Smelter.

The Wandering Emperor is arguably the best overall card within the NEO set. The planeswalker in the MTG color White has Flash, allowing you to play it on an opponent’s turn and cash in on the value that the emperor of Kamigawa offers. She only costs four mana, synergizes with aggressive creature builds, and supports decks that want Modified creatures.