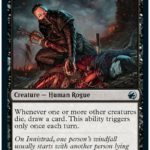 The release of Innistrad: Midnight Hunt contains a number of Uncommon rarity Magic: The Gathering cards that punish opponents in Limited while having gameplay potential in the Standard format.

Uncommon cards in MTG have the potential to fill out a Standard deck while also being bombs within the Limited format. The digital release of Innistrad: Midnight Hunt (MID) brought to light Common and Uncommon cards worth playing in both formats. Several removal cards are worth mentioning, like Play with Fire in the MTG color Red, a Shock with upside if you hit an opponent directly. White got a repurposed Banishing Light with Borrowed Time, and Infernal Grasp in Black destroys a target creature for just two mana and two life points.

There are a number of Uncommon MID creature cards too that are worth mentioning. White got buffed with creatures like Champlain of Alms, Gavony Dawnguard, and Oderic’s Outrider. Covetous Castaway is a solid Blue card within the right build, as are Contortionist Troupe and Deathbonnet Sprout in the color Green.

From Double Strike hits and Blue reprints to opportunistic card draws, here are the best Uncommon MID monocolored creature cards for each of the five MTG colors.

First Strike on a 3/3 creature is solid in any MTG format. Duelcraft Trainer takes things to another level with the MID Coven mechanic, though, providing any target creature Double Strike until the end of the turn. In Limited, the human solder is a sleeper bomb. Meet the Coven requirements and slap Double Strike on an evasive creature, and it might be the quickest Limited game you’ve ever played.

Duelcraft Trainer hasn’t found a home in Standard yet, mostly due to his mana cost. But he’s a good fit in a Midrange human tribal deck and a budget White aggro build.

Delver of Secrets returns to Standard, but his impact on the meta remains uncertain following the digital launch of MID. The one-drop 1/1 slots nicely into spells matter decks, able to transform into a 3/2 Flying human insect upon revealing an Instant or Sorcery off the top of your library.

In Limited, Delver of Secrets can be punishing early on. But he also runs the risk of missing more than he hits, leaving him on the battlefield as a 1/1 chump blocker. Standard holds more promise for the wizard, specifically in UR decks.

A Black bomb in Limited, Morbid Opportunist revs up that card draw engine within UB and BW archetypes. The human rogue has the potential to draw so many cards, that milling yourself out is a possibility if the game runs long.

Gruul and werewolf tribal decks have taken over the Standard meta following the digital launch of MID. Spellrune Painter is a three-drop 2/3 that gets pumped +1/+1 until the end of turn when you cast an Instant or Sorcery spell. The human shaman is also a werewolf, transforming into Spellrune Howler. When it is night, Spellrune Howler is a 3/4 who gets pumped +2/+2.

Spellrune Painter is a strong Limited card in conjunction with other day and night MID cards. In Standard, it’s more of a sideboard card within creature heavy decks but could find its way into a Midrange tempo budget build once the meta settles down.

Hound Tamer is an overall solid three-drop who is a 3/3 with Trample. In Limited, the human werewolf is a great first or second pick in a werewolf or day-and-night-themed build. Hound Tamer has a mana sink for 3G that can put a +1/+1 counter on any creature and transforms into a 4/4 called Untamed Pup.

Untamed Pup synergizes with werewolves, giving them all Trample and still has the mana sink ability. Hound Tamer is a great three-drop within a Standard format werewolf tribal deck that also has the potential to make the cut in a Gruul build, sharing the three-drop spot with the MID card Reckless Stormseeker.