The first week of the Zendikar Rising spoiler season has come to an end. The weekend was mainly filled with Limited playable commons and uncommons. But there are a few interesting mythic rares included in the weekend’s Magic: The Gathering spoilers.

What an interesting design for a mythic rare. For eight mana, cutting the opponent’s life in half isn’t a good effect in Standard. But a two-mana create that easily could come in as a 10/10 or stronger in the late game is scary. Even the floor for this card is still impressive. Black decks in standard right now are great at creating consistent life drain and have no problem dropping the opponent to 15 or less life by turn four. In the early game, this could be a threat similar to Rotting Regisaur without the discard drawback. It’s not unreasonable to expect black decks to include a couple of copies of Scourge of the Skyclaves.

Gruul and Big Red decks are getting a lot of interesting cards to experiment with. A four-mana 4/4 flying creature is already a solid body in Limited. In Standard, it is not an efficient body but for players that can exploit its abilities, it could be a strong card. Using Irencrag Feat or regular ramp to bank significant amounts of mana and turning this card into a loaded weapon your opponent doesn’t want to kill could work. Control decks will have no problem dealing with Leyline Tyrant. 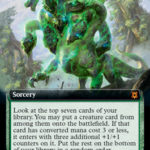 The sorcery side of this double-faced card is powerful. Digging seven cards deep for a creature should find exactly what you’re looking for. The ideal case is finding your biggest creature and putting it on the battlefield. What makes this somewhat overcosted card playable is the built-in whiff protection. If you do end up only getting a small two or three-mana creature, at least it comes in with three +1/+1 counters and packs more of a punch.