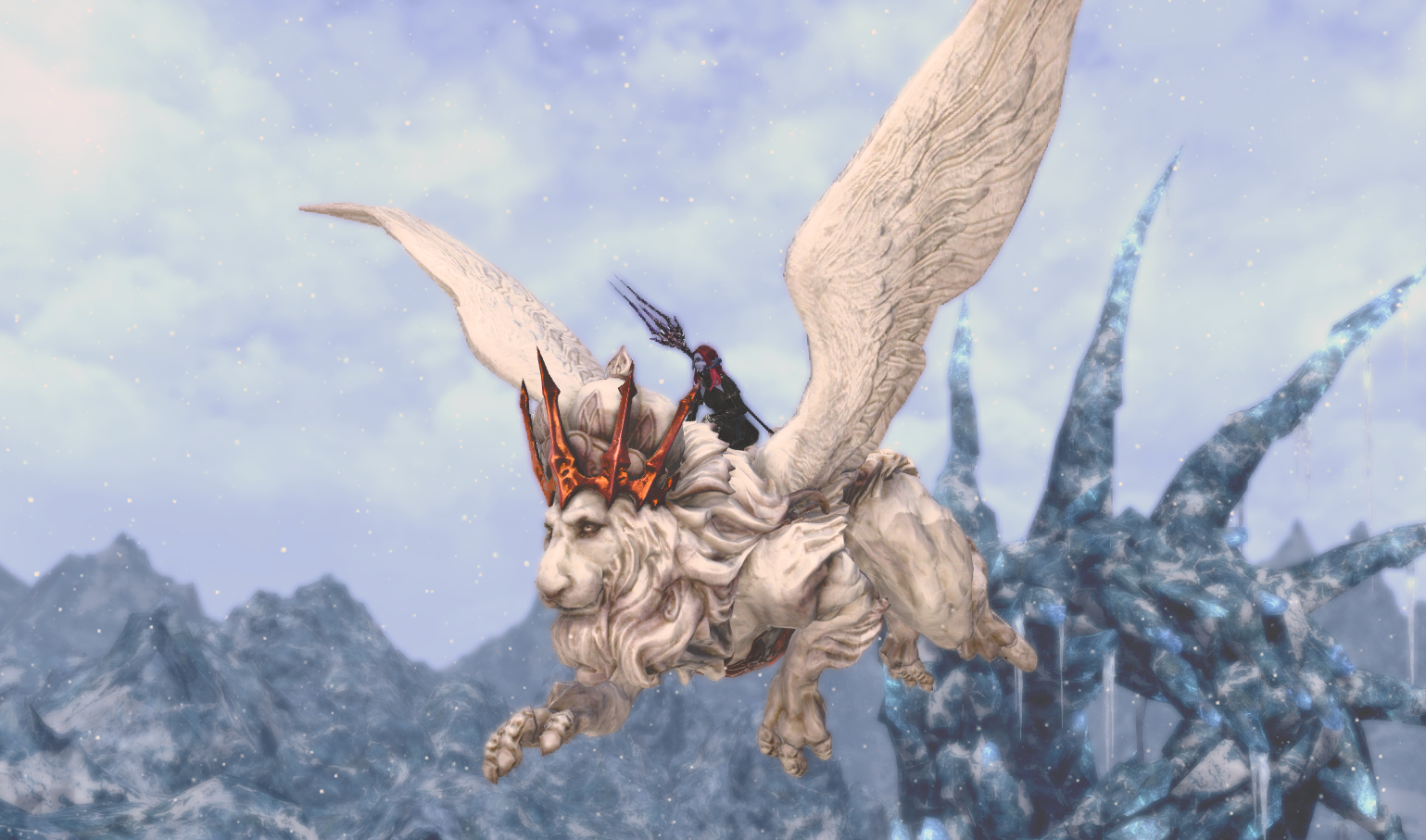 Final Fantasy XIV Online, Square Enix’s MMO title, is full of cosmetic options to choose the perfect style for Warriors of Light, and mounts are certainly the flashiest of all. The game has over a hundred of them, and there’s one for every style—from Chocobos and other fantastic creatures to modern cars.

Here are the best mounts of FFXIV, excluding those only available in the Mog Station. All listed mounts are available for unlocking in the game, though some may take a fair share of grinding.

If you want to bring some joy to the lands of Eorzea, this mount is the way to go. It’s the most popular mount of the Gold Saucer, and it also brings Manderville’s world to you wherever you go with its unique music that activates upon use.

The Sabotender Emperador horn costs two million MGP, which will require some time in the Gold Saucer. Fortunately, seasonal events offer bonuses and will help you get that mount more quickly. The Make it Rain event during the summer, for instance, offers 50 percent more MGP gains when it is live.

This Karakul might be the cutest sheep you can obtain in FFXIV, and it’s also one of the rarest. Unlike most Karakul, the Albino Karakul has white fleece. It has a large bell on its neck and gently bleats when used.

The Albino Karakul is a highly sought item in the Ishgardian Restoration, but unlocking it is not easy. Players can buy its horn for 8,400 Skybuilder’s scrips, a reward from redeeming gathered items to the NPC Enie. Acquiring that many scrips will take its fair share of time.

The Cloud Mallow is yet another round mount that will take some time to unlock. It’s a giant cloud mallow, a helpful resource in FFXIV that grows in the Churning Mists, the home of the mischievous Moogle tribe. It looks comfy, even if players take an unusual pose on it.

Like many other mounts on this list, unlocking the Cloud Mallow will require a fair share of time. Cloud Mallow is available for 200,000 gil from the Moogle tribe, but players must first reach reputation tier eight with the tribe. Completing daily quests and earning points is the way to go, but it will likely take over a week to reach the milestone due to the cap on the number of quests. The Moogle tribe is part of the free trial and is a tribe of Disciples of the Hand.

The first step in unlocking this mount is reaching tier seven of reputation with the Qitari tribe, part of the Shadowbringers expansion. After reaching the milestone, players can unlock it for 18 Qitari compliments, a reward from tribe quests.

There are countless horse mounts in FFXIV, but the Astrope is one of the most magnificent. More specifically, it’s a Pegasus that spreads its wings to fly. Another perk is its two-seat capacity, which isn’t typical for horse mounts.

Unfortunately for players, the Astrope is one of the most challenging mounts to unlock in FFXIV. It’s locked behind a long grind that will take months to complete since it requires 2,000 duties with the Mentor roulette. Players must become Mentors to get a chance at the Astrope—and that’s just the first step.

Become a Mentor comes with some stark conditions. First, players have to complete every quest for healer, tank, and one DPS class. It also requires 1,500 player commendations, as well as 1,000 instanced duties completed.

Far from the previous cute mounts of this list, the War Panther looks bloodthirsty and spoiling for a fight. It’s as gloomy as the class you have to play to unlock it, the Dark Knight. It will require a long grind to get it, but it’s not a difficult endeavor: The War Panther is available by unlocking the achievement to complete 200 high-end duties as Dark Knight. This mount also features an armored version. Those two achievements also exist for Paladin and Warrior classes with other fierce mounts.

A mount fit for a monarch, the Parade Chocobo features march music when it’s mounted, running eagerly to catch its food. It wears a golden crown and stands out from the crowd when players summon it. Its downside, however, is that it can’t fly.

You might already have unlocked this mount unknowingly if you’re a long-time player since its requirement is 3,000 player commendations. Players give them to their peers at the end of every duty, often to healers and tanks.

The Forgiven Reticence looks like a sin eater from Shadowbringers. It’s a crowned lion that draws fear from its enemies. It spreads its wings to fly and gallops through the lands of Eorzea.

It’s also easy to unlock when you’ve been farming level 80 gear since it’s a reward for hunts. It costs for 3,200 nuts, a drop from slaying marked mobs.

The Alte Roite is one of a kind. It’s one of the rare FFXIV mounts that move in circles, similar to a dragon from Japanese folklore. The fans of the Final Fantasy franchise might also recognize the beast from Final Fantasy V, since it’s the dragon form of the wizard Alte Roite.

In FFXIV, it’s the boss of Alphascape 1.0, the raids that all directly refer to past Final Fantasy games, although it’s a reward from Deltascape 4.0 Savage. It has special retro music when mounted that reflects its retro vibe.

You’re done with serving the Namazu tribe and want them to serve you instead? This mount is for you. It carries the players in a comfortable setting and makes gentle sounds when moving, with cute animations from the Namazu, who seem to struggle with hanging onto it when it flies.

To earn the privilege of getting carried by a group of Namazu, you’ll first have to become a powerful ally to the tribe by reaching reputation tier eight. Then, it will be available to purchase for 20 Namazu Koban. It’ll require a certain amount of grinding of daily quests using a Disciple of Hand or Land, but it’s doable within a few weeks.

Another mount linked to a beast tribe, the Portly Porxie especially suits Lalafells due to its small size. The small pig brings support to the Pixies, the mischievous fairies from Shadowbringers. When the Porxie moves, it sparkles. It’s cute and strong enough to carry even the bulkiest Hrothgar.

Similar to the previous mount, the player must reach reputation tier seven with the Pixie beast tribe to be able to buy the mount. It sells for 18 Fae Fancies, collected by completing more quests.

The Demi Ozma is one of the most intriguing mounts of FFXIV. Its nebulous form never stops changing, sometimes taking the form of a circle, sometimes of a square. Similar to a portal from another world, it stands out from the crowd.

Unlocking this mount requires farming in the Eureka area, accessible from Kugane. It’s an area with a different level, and players can get the mount as a reward from its final boss, Ozma.

There are several Kamuy mounts in the game, so you’ll always find one to your taste. But with its mysterious purple gleam, the Lunar Kamuy is particularly impressive. Its aesthetic is reminiscent of Stormblood‘s boss, Tsukuyomi, and for a good reason: this mount is a reward for beating her in savage mode (Minstrel’s Ballad).

Who wouldn’t like to be carried everywhere in the comfort of their bed? In FFXIV, it’s possible thanks to the Magicked Bed. It’s also an easy mount to obtain: rather than being rare loot from some hardcore duty, the Magicked Bed can be crafted by carpenters or bought in the shop.

Cerberus is a mythological beast who will scare your enemies with its gigantic jaw, sharp fangs, and three heads. This FFXIV version features blue fur with gracious white lines. Players have to reach endgame content to earn the Cerberus mount since it’s a reward for clearing Delubrum Reginae in Savage-level difficulty.

This list officially includes mounts available in the game, but it wouldn’t be complete without the classiest vehicle in FFXIV: the Regalia car. It’s perfect for impressing other players, but it also features many seats to give all of your party a ride.

It was only available during the collaboration A Nocturne For Heroes, which ended in 2019, and cost 200,000 MGP in the Gold Saucer. Get ready to stack your MGP, however, since the collaboration event will return in September.