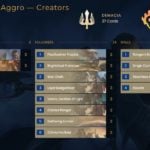 Players in Legends of Runeterra have two weeks left to capitalize on the ever-changing Rising Tides meta.

It’s been two weeks since the release of the Rising Tides expansion in LoR and the meta is beginning to take shape. As is the case with a new set launch in digital card games, Aggro was prevalent on the ladder. Draven Burn and the championless Burn Aggro are the quickest builds to climb the ranked ladder with. But they aren’t necessarily the best.

The P&Z/Noxus Aggro builds are extremely effective when on curve but tend to run out of gas quickly. Much like Yasuo decks, these builds are unstoppable and annoying when performing well and beatable when they aren’t.

Players seeking consistent decks to climb the ladder with can find them within our top-five meta LoR decks from Patch 1.1.

The Demacian region has returned to S-tier status in LoR via Aggro and Midrange. Two specific Aggro builds emerged this past week, Navioot’s Lucian/Vi Aggro and gnaY’s Lucian/Zed reboot.

Navioot showed off the power of Lucian/Vi during the NA community invitational this weekend, dominating over Control and Combo builds. But it’s also effective on the ladder since it’s able to outlast and outrace the P&Z/Noxus Aggro builds while finishing off Control decks before they can fully ramp up. We recommend removing one copy of Swiftwing Lancer and adding a single copy of Unyielding Spirit for Midrange matchups.

GnaY’s reboot of Lucian and Zed is similar to Navioot’s build but contains more spells and Radiant Guardian for Lifegain. It also splashes Ionia instead of P&Z to use spells like Deny and Spirit’s Refuge. 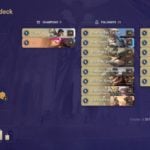 Bannerman Midrange has also returned to the LoR meta with a few tweaks thanks to Prismaticism’s Unyielding Fiora build and Astrogation’s rebooted version of BBG’s original Bannerman Midrange.

Unyielding Fiora was able to squeeze out a win over Navioot’s Lucian/Vi in the NA community tournament. But both decks are essentially equal in power depending on the matchups. The deck uses Unyielding Spirit on Fiora and Radiant Guardian for Lifegain, along with the Grizzled Ranger and Badgerbear package. But the addition of Vi as a champion allows the deck to perform well in late-game matchups.

Astrogation’s version also uses the same package as Prismaticism but has Garen as a champion for the late game and as a finisher over Vi. Both builds are solid decks to run on the ladder climb, especially within Platinum and Diamond.

Petar Stevanovic has created a unique Freljord/Noxian Sejuani and Ashe deck that he used to climb from Diamond to Master this past week. Sejuani is extremely powerful when leveled up and the Ashe Frostbite package stalls out opponents until Sejuani comes online.

The deck also uses Trifarian Assessor in conjunction with Babbling Bjerg and Averosean Hearthguard for card draw that increases tempo for an overall advantage. For players seeking a build that isn’t a reboot, we highly recommend Stevanovic’s Freljord/Noxus deck.

Corina Control has returned to the LoR meta as well with an upgraded version using Elise and Vi. The Ultraman1 deck takes advantage of the Shadow Isles’ spells in conjunction with the Elise spider package and low-cost spells to level up Vi quickly.

The build also takes advantage of P&Z spells like Gotcha!, Statikk Shock, Thermogenic Beam, and Mystic Shot. Vi is a powerful addition thanks to an increase in her power and defense with each spell or unit that’s cast. This allows Corina to become an alternate win condition instead of the primary one.

Created by BBG, the Lux/Karma Control deck is similar to Szychu’s version that won the EU community invitational over the weekend. His tweaks to the build make it a tad more ladder friendly, though. Much like Unyielding Spirit on Fiora, this build likes to put it on Lux for a deadly combo of damage and lasers. And because it’s a six-cost spell, it’ll level her up when played.

Karma hasn’t lost any of her power and remains one of the best champions to include in a Control build that uses a number of spells. In conjunction with Lux and her lasers, it forms a deadly combo come turn 10.

The deck is unique in that it uses the Grizzled Ranger and Badgerbear package in conjunction with Radiant Guardian. It also contains Shadow Assassin for card draw and Elusive blocking while taking advantage of the new LoR unit, Eye of the Dragon.