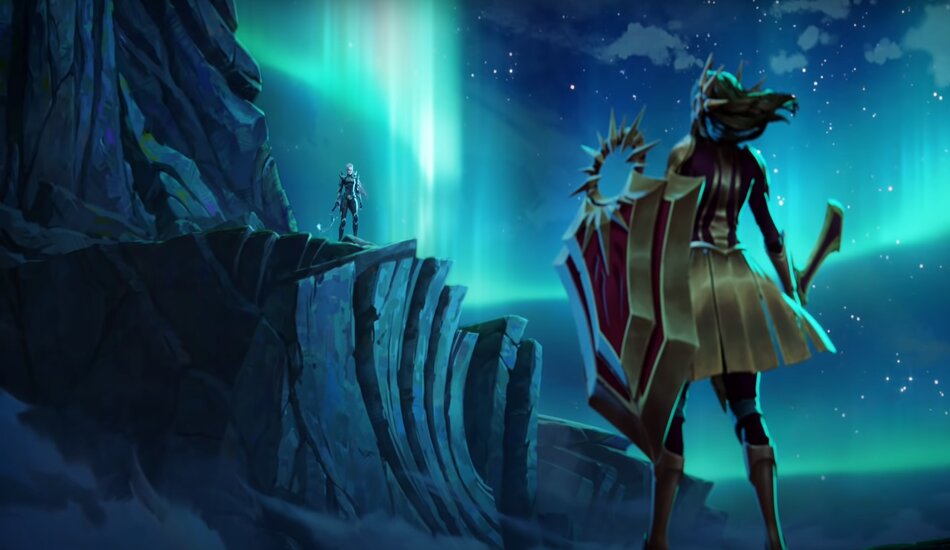 Riot Games released its first Tales of Runeterra video since Bilgewater today, featuring potential champions of the Targon region in the upcoming Call of the Mountain set.

The new Legends of Runeterra set, Call of the Mountain, is scheduled to release on Aug. 26. And with its release will come three expansions that include Targon as a new region and a number of its champions. To hype up the start of spoiler season for Call of the Mountain, Riot dropped a new Tales of Runeterra cinematic today titled “The Vaulted Road.”

A Lunari scout and her Solari lover are the focus of “The Vaulted Road,” with the peaks of Mount Targon as a stunning backdrop. Having escaped from the Solari Sunward Temple, the Lunari prisoner scout meets her lover as an eclipse takes shape in the sky. Determined to be together, the two lovers flee as Leona and her soldiers pursue them.

Diana looks on from a distance as the two lovers reach a cliff’s end. A Solari soldier fires an arrow at the two, despite Leona’s attempt to stop him. The arrow flies true, striking the Lunari scout as the eclipse begins. Having foreseen in a vision that the eclipse would be their path together, the Solarian carries his Lunari lover off the cliff. Rather than plummeting from the cliff’s edge, the two lovers walk together into the eclipse via a magical path, bound together forever.

Diana and Leona have a brief and silent exchange following the miraculous events. But neither attack and the two champions go their separate ways.

Based on data leaks, both Leona and Diana have voice lines in LoR already and are likely two champions being added within the Call of the Mountain set. It’s also possible that the Lunari scout and her lover will make an appearance either as support units or perhaps a new spell.

Previews of champions begin today, with LoR spoilers dropping up to the release of Call of the Mountain on Aug. 26.