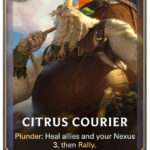 Legends of Runeterra’s card reveal season has finally reached the shores of Bilgewater. Four new cards from the newest region were unveiled today.

Plunder won’t be a Bilgewater-specific mechanic since three new Freljord cards were revealed today that also had the mechanic. But these new Bilgewater cards show some creative applications of the new keyword.

The four cards showcase three new follower units and a spell all of different rarities. Citrus Courier has straight-forward effectiveness. If your deck is board control based and you manage to inflict damage with your units, you can launch another full-fledged attack with your entire board. An effect like this is usually found on spells like Relentless Pursuit or Shunpo, leveled-up champions like Katarina, Lucian, or Garen, or expensive followers like Tianna Crownguard. This card gives you a cheaper option that still adds to your board, and as an extra bonus, you restore the health of your units and your Nexus.

Warning Shot is a simple burst spell. It costs zero and deals one damage to the enemy Nexus. While the immediate and obvious application is to help enable Plunder cards unconditionally, another place this card can find a home in is spell-based decks, like the newly-revealed Lee Sin, or into existing Karma/Ezreal decks as cheap spell fodder to inflict six damage to the enemy Nexus for zero when you have both leveled on the field.

Smooth Soloist is the second-most expensive card revealed today at seven mana, but it has the potential to enable devastating combos for players who love mixing cards together. If you can trigger her Plunder ability, she reduces the costs of your units, champions, and followers alike in both hand and deck. This can create serious discounts if you manage to draw her early enough. In addition, having Elusive allows her to assist you in triggering Plunder on future turns after you play her.

Jagged Taskmaster has a powerful, aggressive effect that boosts the potency of your cheap one-cost units. Her Plunder effect gives your least-expensive units in hand, deck, and field a slight attack boost. This assists hyper-aggressive decks, letting their one-drops trade more favorably into higher cost enemy units and allowing you to sneak more potential damage by.

These four new cards will join the collection when LoR is officially released for PC and mobile on April 30.