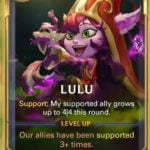 Legends of Runeterra: Call of the Mountain’s card reveal season is still surging on. And today, Riot Games revealed the second champion from the Ionian region, building upon the support mechanic from previous reveals.

Lulu is the champion that Riot unveiled in today’s teasers. She’s a three-cost champion unit boasting 2/3 in stats with a Support ability that grows her supported ally’s stats up to 4/4 for the round. She reaches her leveled form when your allies have been supported three times.

Lulu’s leveled form is also three-cost with +1/+1 in stats, an upgraded Support ability to grow to 5/5 instead, and a Round Start ability that creates a fleeting “Help, Pix!” in your hand. Help, Pix! is a one-cost Burst Spell that either grants an ally Barrie or grants an enemy Vulnerable for the round. Similar to the recently-revealed Gems, Help, Pix! can’t be cast in combat or in response.

Similar to all of the other Support cards shown off in the first three days of the Call of the Mountain reveal season, Lulu’s strength comes from supporting a powerful curve of units. Unlike the recently-revealed Taric, Lulu doesn’t need to be on the board to receive her level up credit, allowing players to often drop her when she attains her leveled up form. Once Lulu levels up, enemies will have to decide if they want to open their attack phase instantly. Otherwise, they’ll have to deal with a minion with Barrier if they choose to delay their battle.

Without Rally-effects, players can often find themselves having Lulu leveled up by round four, five, or six, depending on if they go first or second. Deck compositions will be vital to making sure Lulu can attain her leveled form since she has a weak 2/3 in stats on a three-mana body before leveling up.

Lulu’s champion spell Whimsy is also potent removal in the heat of battle. She can oftentimes reduce empowered followers to tiny, effectless, 1/1 Squirrels. Players must note that Whimsy’s transformation effect only lasts for one round, so if they can’t remove the minion after turning it into a Squirrel, then they wasted four mana for nothing.

Lulu will join the champion roster when LoR: Call of the Mountain’s first set is officially released for PC and mobile on Aug. 26.