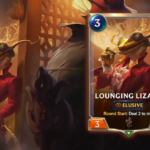 A self-damaging theme for Legends of Runeterra was introduced in today’s spoilers for the upcoming Monuments of Power expansion.

Joining Noxus and Shadow Isles, Bilgewater will have a strong self-damaging theme that players can capitalize on when MoP is released on Oct. 14. A total of six cards were revealed today, two spells and four followers. The docks of Runeterra have dominated at various points within the LoR meta via Nab and damage versatility. Each of the followers revealed today contains a self-damaging theme that provides an advantage via low casting costs and abilities.

Lounging Lizard is a 3/5 Elusive three-drop that would be a broken card if not for the self-inflicting damage of two at each round start. Aggro builds can still get a maximum of three uncontested strikes at an opponent’s Nexus (nine total damage), or two strikes followed by sacrificing it to Crumble.

A new card type, Landmark, was revealed over the weekend—highlighting the lack of removal in LoR to deal with it. Crumble is an ideal answer to detrimental Landmark cards, destroying them when an ally is sacrificed. It can also kill a unit, either one of yours or an opponent’s.

The other cards revealed today include Fortune Croaker, who provides early card draw with a solid stat line of 2/3 as a two-drop. And the eight-cost spell Sunk Cost shuffles a unit or Landmark card into your deck.

Today’s MoP Bilgewater and Targon spoilers will release within LoR on Oct. 14.